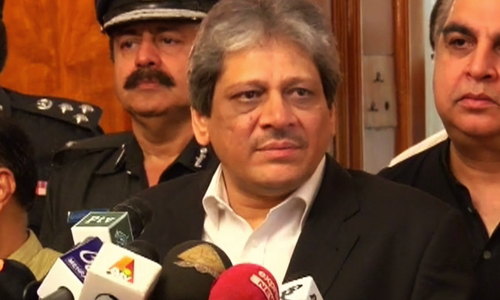 After 14 years in office, Ishratul Ibad has been replaced as governor Sindh, it emerged Wednesday.

Ibad has been replaced by a former chief justice of Pakistan, Justice Saeeduz Zaman Siddiqui. Siddiqui was among the aspiring candidates for the post of president in 2003 and 2008.

Siddiqui confirmed the development while talking to DawnNews, saying he is going to assume the office. He said that restoration of law and order in Karachi would be his first priority.

“I will try my best to address the issues of people,” he said.

“I believe that maintaining peace in Karachi is the joint responsibility of both the provincial government and the governor. If peace is maintained in the city, businesses will flourish and people will take a sigh of relief,” he said while emphasising the need of peace in the province.

He said that after taking oath he will review the issues of funds and powers so as to put the matter of local government in order.

“We also need to look into the political divisions in the city so as to utilise political segments in order to resolve problems of the people.”

He said Ibad was removed due to “recent controversies”.

The decision to replace the governor was taken by the federal government. The governor’s office declined to comment on the matter.

Ishratul Ibad began his political career as a worker of the All Pakistan Mohajir Students Organisation when he was studying in Karachiâ€™s Dow Medical College.

Ibad contested the general elections in 1990 on a provincial assembly constituency as a candidate of the Mohajir Qaumi Movement-backed Haq Parast group and became a minister in the Jam Sadiq Ali cabinet.

He went underground to avoid arrest after an army operation was launched against the MQM in June 1992 and surfaced a year later in London, where he obtained political asylum.

While he was very close to Altaf Hussain, he maintained a low profile in the MQM until 2002 when he became the acting convener of the MQMâ€™s coordination committee after Altaf Hussain removed then convener Dr Imran Farooq from the post.

He was considered as “man of crises” among MQM cadres.

Ibad became Sindhâ€™s youngest governor on Dec 27, 2002 as a representative of then president Gen Pervez Musharraf. He has served as Sindh governor for nearly 14 years.