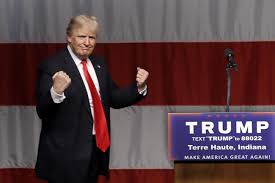 Americans fed up with eight years of a sluggish economy and a growing disconnect with their leaders in Washington voted Tuesday to send businessman and political novice Donald Trump to the White House, guaranteeing one of the biggest shakeups in political history.

Wins in Pennsylvania and Wisconsin gave him enough projected electoral votes to defeat former first lady, former senator and former Secretary of State Hillary Clinton, whose quarter-century in Washington â€” and the long list of stumbles, including a scandal over a secret email server â€” made her anathema for too many voters.

Mrs. Clinton had been seeking to make history as the first woman to win the White House, but instead the 70-year-old Mr. Trump made history of another sort, becoming the first person elected to the top job without having held a high government office or military command.

His victory upends a Washington establishment that voters said had lost touch with folks back home, and is a searing rebuke to President Obama, who had pleaded with voters that his hope-and-change agenda was at stake in this election.

Mr. Trump powered his campaign with a simple mantra to â€œMake America great againâ€ and he vowed to live up to that charge as president, saying he would rebuild the countryâ€™s inner cities, improve care for veterans, double economic growth and forge alliances with other nations willing to work with him.