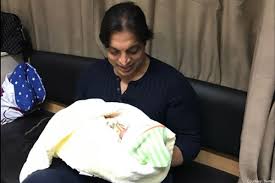 Former Pakistan speedster Shoaib Akhtar on Tuesday announced the birth of a baby boy on Twitter.

The 40-year-old fast bowler expressed his happiness in a tweet as he announced that he and his wife had been ‘blessed with a healthy baby boy.’

“The most prized catch my hands have ever, ever held on to… what a feeling!” Akhtar exclaimed.