No decision or consultation yet about appointment of next army chief, says Khawaja Asif 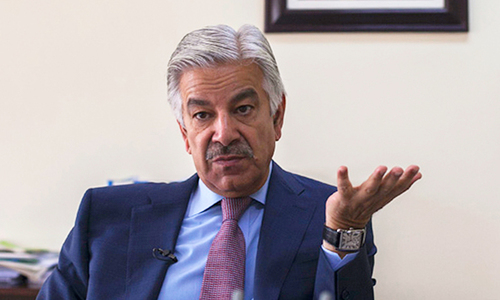 No decision or consultation yet about appointment of next army chief, says Khawaja Asif

Defence Minister Khawaja Asif on Tuesday revealed that no decision has been taken yet and currently no consultations have been initiated regarding the matter of appointment of next army chief.

â€œNo decision or consultation for the appointment of new army chief has been done yet,â€ Asif said while giving an interview to DawnNews.

The defence minister lauded efforts of the army for facilitating the continuation of democratic setup in the country.

When asked about the resignation of former information minister Pervez Rasheed, Asif declined to comment on the issue.

â€œI will not comment on issue of former information ministerâ€™s resignation as investigation committee is conducting the inquiry.â€

While commenting on the issue of Panama Papers and role of opposition, Asif said: â€œOpposition does not have concrete evidence and they [opposition] are trying to prolong the Panama Papers scandal.â€

â€œI respect the courts of Pakistan, hence, I will not comment on remarks made by judges regarding the Panama issue,â€ he asserted.

The senior PML-N leader said that, â€œGovernment was not hesitating from accountability of the prime minister, we will accept Panama bill if it get acceptance from the majority.â€

Asif, however, declined to comment when asked about the possibility of a judicial coup.

about appointment, Army Chief, No decision, or consultation yet, says Khawaja Asif