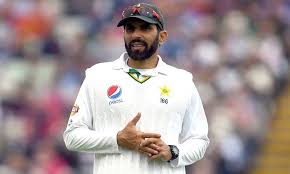 Pakistan Cricket Board (PCB) Chairman Shaharyar Khan has said that the replacement for Test Skipper Misbah-ul-Haq has not been decided yet.

While talking about who will replace Test captain Misbah-ul-Haq, who is expected to step down from the helm after the New Zealand and Australia tours, Shaharyar said that a successor hasn’t been decided yet.

â€œWe haven’t decided who will lead the Test side once Misbah steps down,â€ he said.

â€œIf the upcoming tours in Australia and New Zealand go well then we can even ask Misbah to continue leading the side for a while,â€ Shaharyar said in an exclusive interview with a local newspaper.

He further added, â€œMisbah and Younus Khan have been performing well for Pakistan and are in contention to remain in the side. However, they are nearing their retirements and for the future of the team we must make preparations from now.â€

Speaking about Muhammad Hafeez, Shaharyar said Hafeez’s illegal bowling action led him to be stripped off the status of an all-rounder and he will play as a batsman if he ever got picked for the national side.

â€œHafeez has requested to be tested in Loughborough, Cardiff and we obliged because he is a senior player of the team. However, if he fails to clear his test once again, it will be extremely difficult for the selection committee to include him in the national side,â€ Shaharyar said.

Commenting on the Pakistan Super League (PSL) enters its second edition in 2017 and PSL Chairman Najam Sethi had announced earlier that the T20 league would become an independent entity, separate from the PCB, Shaharyar said that the board itself gave permission for this to happen.

â€œThe league authorities feel that they will enjoy more freedom as an independent company as they will be able to take administrative decisions on their own. They can certainly do that as long as there are no violations of PCB rules. This decision was made by the Board of Governors,â€ he said.