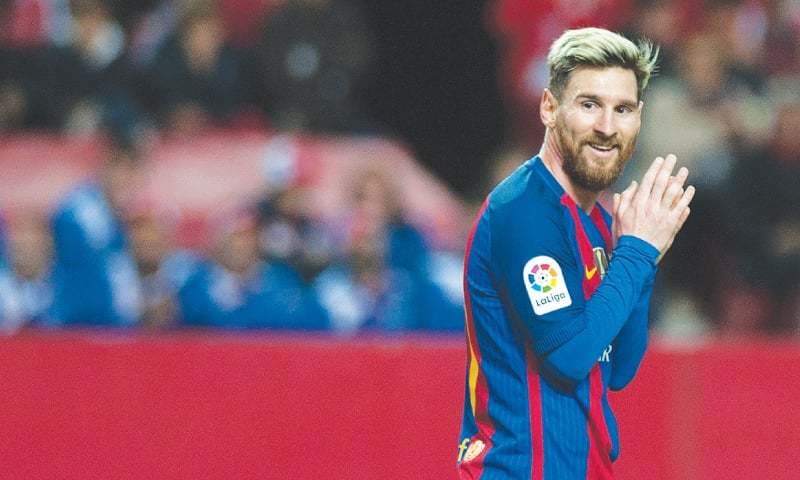 SEVILLE: A mesmeric Lionel Messi scored his 500th goal for Barcelona and helped the Catalan club to come from behind and beat

Sevilla 2-1 in a thrilling encounter on Sunday as the champions kept the pressure on La Liga leaders Real Madrid.

Barca were put under immense pressure from kick-off and fell behind to Vitoloâ€™s 15th minute strike.

Messi levelled just before halftime following a slew of missed chances from the hosts.

After the break, Barca took control and Luis Suarez fired in the winner in the 61st minute to save them from a second defeat in six days.

Sundayâ€™s meeting between Jorge Sampaoliâ€™s relentless Sevilla and a Barcelona side smarting from 3-1 defeat at Manchester City in the Champions League on Tuesday promised a lot and lived up to the hype as a breathtaking end-to-end encounter ensued.

The hosts had two shots on goal inside 50 seconds, but from a Sevilla corner Barca broke forward at lightning speed and Suarezâ€™s effort from Neymarâ€™s layoff was brilliantly saved by Sergio Rico.

Sevilla remained on the front foot for most of the first-half and opened the scoring as Luciano Viettoâ€™s through ball caught Sergi Roberto unawares and Vitolo swooped in to slot past Marc-Andre Ter Stegen.

Sevilla grew in confidence and looked to grab another, Vietto firing wide from a tight angle and Vitolo crashing over the bar.

But Barca drew level following a wonderful break by Messi which drew in Denis Suarez and Neymar before the Argentine finished off.

Messi is the clubâ€™s all-time leading scorer with 469 goals in official matches and 31 in friendlies.

â€œThere is no one like him and our objective as a team is to look for Leo as much as possible,â€ Barca boss Luis Enrique told Spanish TV station Movistar. â€œThe capacity Messi has to play in any position and interpret what is happening on the field is laudable.â€

Not content with that milestone, Messi set up Suarezâ€™s winner with a precise pass to end Sevillaâ€™s 100 percent record at home in the league and Europe.

â€œComebacks like this always make a team stronger, especially when you remember no-one else has won at this ground,â€ said Enrique.

â€œIt was a wonderful game for