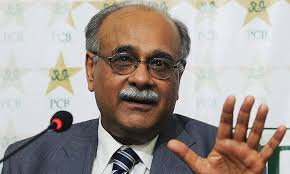 Pakistan Cricket Board (PCB) Executive Committee Chairman Najam Sethi on Tuesday revealed that Pakistan had demanded monetary compensation from Board of Control for Cricket in India (BCCI) and International Cricket Council (ICC) for damages after Indiaâ€™s refusal to play the scheduled series.

â€œWe have mentioned it clearly to BCCI and ICC in recent meeting that either India should play cricket with Pakistan or compensate us for damages,â€ said Najam Sethi while talking to media after meeting of PCB Governing Board.

Board of Control for Cricket in India (BCCI) President Anurag Thakur had already requested the International Cricket Council (ICC) to not place India and Pakistan in the same group during upcoming international events.

“Keeping in mind that the [Indian] government has adopted a new strategy to isolate Pakistan and in view of the public sentiment in the country, we request ICC not to put India and Pakistan in the same pool of the multi-nation tournaments,” the BCCI president had said.

Cricketing ties between India and Pakistan are currently stalled, given the political tensions between the neighbours.

The men’s teams have not played a bilateral series against each other since December-January 2012-13, when Pakistan visited India, but have met in various multi-team tournaments since then, including the World Cup, World T20, Champions Trophy and Asia Cup.

Pakistan Women are set to tour New Zealand for three ODIs in Nelson from November 13 to 17, counting towards the championship. It is understood the PCB wanted to play the India series ahead of this tour.

India and Pakistan’s women’s teams are also scheduled to play the Asia Cup in Thailand between November 25 and December 5.