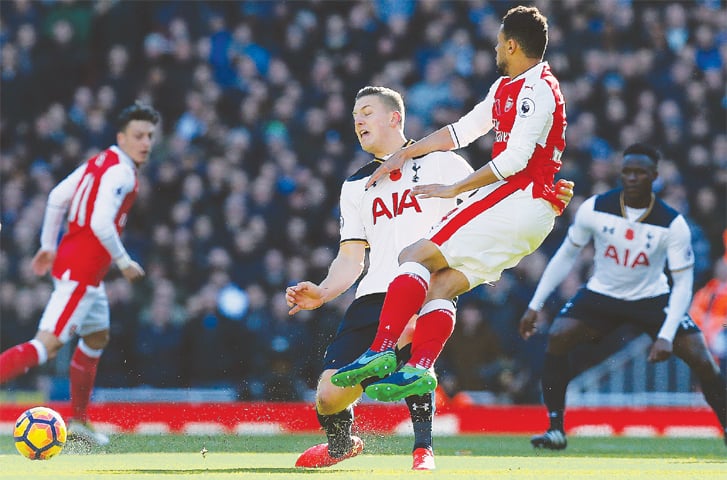 LONDON: Liverpool swept to the top of the Premier League as Sadio Maneâ€™s double inspired a 6-1 rout of Watford, while Tottenham rescued a 1-1 draw at North London rivals Arsenal on Sunday.

While Liverpool dazzled, their old rivals Manchester United ended a four-match winless run in the league as goals from Paul Pogba and Zlatan Ibrahimovic secured a much-needed 3-1 victory at Swansea.

Liverpool have emerged as genuine title contenders and Jurgen Kloppâ€™s side moved to 26 points, one point clear of second-placed Chelsea, who smashed five past Everton on Saturday.

Also on Saturday, Manchester City were held 1-1 at home by a last-minute goal from promoted Middlesbrough and they remain a point further adrift in third, ahead of Arsenal on goal difference.

Liverpool took the lead in the 27th minute when Senegal winger Mane met Philippe Coutinhoâ€™s corner with a header that looped past Watford goalkeeper Heurelho Gomes.

Just three minutes later, Roberto Firmino picked out Coutinho on the edge of the penalty area and the Liverpool forward fired home with a fine low strike.

Kloppâ€™s team were three up two minutes before half-time as Emre Can arrived unmarked at the far post to head in Adam Lallanaâ€™s cross.

The goals kept coming and Firmino added the fourth in the 57th minute, the Brazilian finishing off Lallanaâ€™s cross, before Mane got his second in the 60th minute with a clinical close-range effort from Firminoâ€™s pass.

Daryl Janmaat notched his first goal for Watford in the 75th minute, but there was still time for Liverpool to complete the demolition in the 90th minute through Georginio Wijnaldumâ€™s tap-in.

Liverpool have won seven of their last eight league games and go into the international break with growing belief they can win the clubâ€™s first English league title since 1990.

â€œItâ€™s better than being 10th, or whatever. Itâ€™s very important to collect the points for the final third of the season,â€ Klopp said of his teamâ€™s position.

â€œOn a good day, we are really difficult to play and thatâ€™s the most important thing we can say.â€

At the Emirates Stadium, Harry Kane marked his return from injury with the equaliser as Tottenham kept their hated neighbours from the Premier League summit.

Arsenal took the lead in the 42nd minute when Tottenham defender Kevin Wimmer headed a free-kick into his own net.

But England striker Kane, who had been sidelined for seven weeks due to ankle ligament damage, equalised for Tottenham from the penalty spot early in the 51st minute after a foul on Mousa Dembele by Laurent Koscielny.

The result prevented Arsenal from climbing above Chelsea and Manchester City and opening up a six-point gap over Tottenham, who remain fifth, three points below Arsene Wengerâ€™s men and four points off first place.

Wenger was angered by Tottenhamâ€™s penalty and said: â€œFrom where I sit, it looked harsh. It didnâ€™t look a deliberate foul or that he was dangerous to score.â€

Despite his frustration over the spot-kick, Wenger accepted the result was â€œfairâ€ and Tottenham boss Mauricio Pochettino agreed.

â€œItâ€™s difficult to say one team deserved it more than the other,â€ Pochettino said.

After a difficult period for Pogba and Ibrahimovic, Unitedâ€™s star duo were back on song at the Liberty Stadium.

France midfielder Pogba put United ahead in the 15th minute with a sumptuous volley and Swedish striker Ibrahimovic bagged the second six minutes later with a shot that Swansea goalkeeper Lukasz Fabianski might feel he should have saved.

Ibrahimovic followed his first league goal since September with another one in the 33rd minute as he lashed in from Wayne Rooneyâ€™s pass.

Swansea defender Mike van der Hoorn reduced the deficit in the 69th minute and there was late frustration for Ibrahimovic when he picked up a booking that rules him out of Unitedâ€™s next match against Arsenal.

Elsewhere, Hull staged a second half fightback to end their barren run with a 2-1 victory over Southampton at the KCOM Stadium.

Southampton went in front in the sixth minute when Curtis Davies fouled Maya Yoshida and Charlie Austin belted the resulting penalty straight down the middle.

But Robert Snodgrassâ€™s excellent finish from 12 yards drew Hull level in the 61st minute and former Tottenham defender Michael Dawson put the Tigers ahead when he glanced in a free-kick two minutes later.

Chelsea produced an irresistible performance at Stamford Bridge with Belgian forward Eden Hazard scoring twice to inspire a fifth successive win for his team without conceding a goal.

â€œWhen you win in this way, itâ€™s fantastic,â€ Conte told BT Sport. â€œItâ€™s a pity that now we have to stop for the international break.â€

All had seemed well for Manchester City when Sergio Aguero scored his 150th goal for the club, converting Kevin de Bruyneâ€™s pass, to put them ahead just before halftime.

City, who beat Barcelona in the Champions League on Tuesday, had 19 goal attempts in a dominant first-half performance but failed to make their early dominance pay and were stunned when Boroâ€™s Martin de Roon headed home powerfully in the 91st minute.

Sunderland, bottom of the table and without a win all season, fought back for a shock 2-1 victory at Bournemouth.

Crystal Palace suffered a fourth successive defeat, losing 3-2 at Burnley to a stoppage-time goal after fighting back from conceding two early goals.

Stoke City extended their unbeaten run to six games with a 1-1 draw at West Ham.