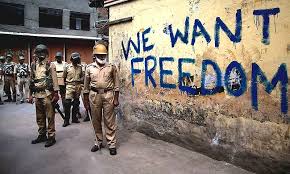 SRINAGAR: Chief of the Jammu and Kashmir police has said that situation in the India-held region is still grim.

The director general of police (DGP), K. Rajendra, told a meeting of top civil and police officials chaired by Chief Minister MehÂ­booba Mufti that situation in the held Valley had improved a bit since the death of Burhan Wani in July, which set off massive unrest there.

DGP Rajendra said that even though the â€œintensity and spread of the situation has come downâ€, it continued to be extremely fragile.

He claimed that between 250 and 300 militants were active in the disputed region. â€œGiven the present situation, we need to have a roadmap for the next two to three months,â€ he said.

The DGP said at least 70 buildings had been set ablaze during the ongoing unrest in the Valley. â€œOf these 70 buildings, 53 have been destroyed,â€ he said.

At the meeting, deputy commissioners and SSPs of the Kashmir division made detailed presentations on the ongoing development works, some of which have been affected due to the situation.