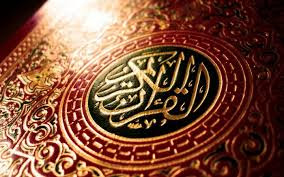 Holy Quran 1:5-7 depict a believer at the threshold of such a loving God, beseeching, “You alone do we adore but, being weak, need your succor.

The Quran is the holy book of Muslims. It literally means “an oft-recited book,” and it is, in fact, the most read and recited book on Earth. Muslims recite a portion in their five daily prayers, and as such, at all times, a large portion of humanity is reciting the Quran in the worship of God; their voices rising and falling throughout the day and night, around and around the globe, like the ceaseless cadence of ocean waves.

Muslims believe the Quran is the unalterable Word of God and a message to humanity delivered through Prophet Muhammad (Peace and blessings of God be on him.), who received this message over a period of 23 years. Every time Muhammad received the revelation from Allah, he had a scribe write it down. The language of the Quran is an exquisite classical Arabic. The Ahmadiyya Muslim Community has translated and published the Quran into more than 70 languages. However, the original Arabic always accompanies the translations, as the words of the Quran are inimitable and the breadth of its meanings untranslatable.

The first chapter of the Quran called Al-Fatiha (“The Prolog”) comprises of only seven verses. However, it has been described variously by the Prophet as the “Mother of the Book,” the “Great Quran,” the “Treasure,” the “Prayer,” the “Chant,” the “Cure” and the “Oft-repeated Seven Verses.” No prayer is complete without its recitation. It is the summary of the entire Quran and the message of Islam in just a few words:

At the very outset, the Quran introduces the proper name of the supreme being as Allah. The Hebrew equivalent is El or Elohim. (The latter word being pluralized to indicate his majesty and power.) In the beginning of the chapter, Allah’s glorious attribute of being the lord of all the worlds (creator, sustainer and nurturer) is parenthesized between the supreme attributes of his boundless grace and all-encompassing mercy, each of which gushes forth from the fountainhead of his love. Thus, Islam, from its very inception, introduces Allah as the God of Grace, the God of Mercy, the God of Love — not a God of vengeance, violence and hate. This theme is repeated throughout the holy book. For example, Allah says, “My mercy encompasses all things” (Holy Quran, 7:157). The final attribute of God mentioned in the opening chapter is that of Master of the Day of Judgement. It is a message of hope: The one defined by his grace needs no payment or ransom to grant forgiveness, nor is the one defined by his mercy compelled to punish even as people are called to account for their actions and motives.

Holy Quran 1:5-7 depict a believer at the threshold of such a loving God, beseeching, “You alone do we adore but, being weak, need your succor. So, help us, O God! Show us that path which your faithful ones — the peacemakers, the children of God — had trodden before, the path of love and absolute commitment and sacrifice to seek your pleasure. Protect us from following a path that leads away from the canopy of your love and grace. Also, having been led on to the path of your love, save us from losing it.”

This reminds me of a poem I read in my high school English textbook that relates the story of Abu Ben Adhem. (May Allah be pleased with him.) One night, Abu saw in a vision an angel writing in a book that shined brilliantly. He asked what book it was. The angel told him the book contained the names of those who love God. “Is my name there?” asked Abu. “No, not in this one,” was the answer. Abu felt sad but then suggested, “Write then my name among those who love his people.” The next night Abu was awakened by an even grander vision. The same angel was with another book, shining brighter than the previous one. “This is the book that has the names of those whom God loves and blesses,” told the angel. And, lo, Abu Ben Adhem topped that list.

May we all be the seekers of that well-trodden path of love that leads to God’s pleasure, and may we remain steadfast on that path. Amen.