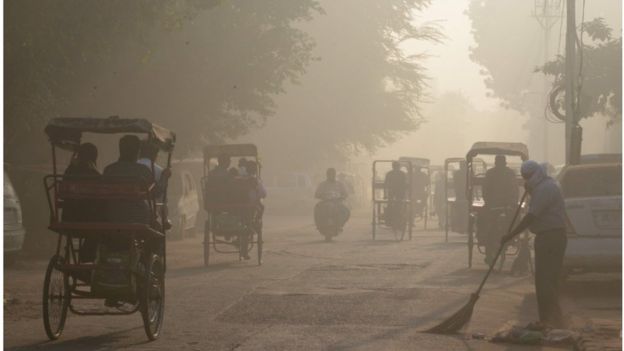 NEW DELHI: Schools in the Indian capital would be closed for the next three days, the Delhi state government said on Sunday, as the city struggled with one of the worst spells of air pollution in recent years.

â€œAll construction and demolition in the city will be banned for next five days. All schools will be closed for the next three days in Delhi,â€ he added.

Thick smog has blanketed the capital for days, with local and central authorities meeting to resolve the crisis.

Kejriwal, who chaired an emergency meeting of the state cabinet, advised people to stay indoors as much as possible and work from home if they could.

Other measures announced by the government include fighting fires at landfill sites, sprinkling water on main roads to suppress dust and shutting down a power plant.

The chief minister, who on Saturday compared the state to a â€œgas chamberâ€, has blamed crop-burning by farmers in neighbouring states for the smog.

Most of Delhiâ€™s neighbouring states are largely dependent on agriculture, with farmers resorting to crop-stubble burning before each sowing season, which worsens air pollution over Delhi and its satellite towns.

Indiaâ€™s environment minister Anil Madhav Dave, who met the state leadership on Saturday, is expected to discuss a solution to the crop burning issue with leaders of neighbouring states this week.