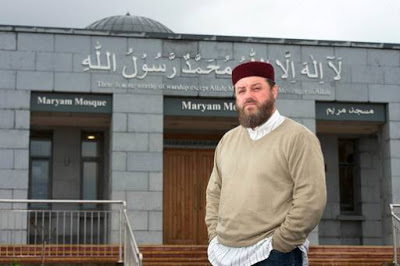 The imam of Galway, Ibrahim Noonan, said that he knew [suicide bomber] Khalid Kelly and met him in London with notorious Islamist extremist Anjem Choudary.

The imam of the Galway Mosque said he tried to warn the Dublin Isil fighter who carried out a suicide attack in Iraq that his ideology was wrong.

Dubliner Terry ‘Khalid’ Kelly was reportedly killed as he carried out the attack near Mosul on Friday.

Terror group Isil claimed that Kelly – also known as Abu Usama Al-Irlandi – killed “dozens” of Iraqi soldiers. However, it has since been confirmed that nobody else was killed when the DIY armoured vehicle rigged with explosives was driven at Iraqi forces.

Kelly, who was radicalised while serving a jail sentence in Saudi Arabia, was previously arrested and questioned by Garda Special Branch officers in 2015 over concerns about a plot to attack Prince Charles during his May 2015 visit to Mullaghmore in Sligo.

The imam of Galway, Ibrahim Noonan, said that he knew Khalid Kelly and met him in London with notorious Islamist extremist Anjem Choudary.

“At that time, I was the national president of the Ahmadiyya Muslim Youth Association UK, where Khalid was taught this medieval ideology from Shaykh Umar Bukhari and Anjum Choudary. Ironically, we both ended back up in Ireland 2003,” said Mr Noonan.

“We met a number of times in Dublin over the years and our last discussion was about four years ago where he was trying to convince me of his medieval interpretation of jihad and how he felt we should be fighting in Iraq and Afghanistan.

“I honestly tried to show him that this ideology was wrong and such teachings were not to be found in the Qur’an or the Sunnah of the Prophet (practice).

“I feel sombre at such a waste of a life, an Irish life, who was brainwashed by extremists in UK and Ireland.”

In a letter to the Irish Independent, Mr Noonan said that Khalid Kelly “won’t be the last Irishman to fight for Isil”.

“And as I have said so many times, until all the imams stand up and explicitly say to their congregations in their mosques ‘We do not support Isil, radicals or extremists . . . this extremism will continue to seed in Ireland.

“Again, I call on all imams to come out and say we do not support extremism from any part of the Islamic world until they are brave and say this, this won’t be the last Irish man who might go and fight alongside Isil,” he said.

“But you find Irish Ahmadi Muslim converts, men and women spreading the message of true Islam and the message of peace. When will the media call them to hear voices?”

Meanwhile, the imam at a Dublin Mosque on the South Circular Road, Dublin, has condemned the Kelly’s actions.

Mr Yahya Al-Hussein said that Kelly had “strong opinions” on religion. “Of course, we disagree with the actions of the Islamic State, and in our view, in our society, bombing or anything like that is prohibited,” he told the Irish Independent.

The imam said that Kelly often attended his mosque and took part in services, but that he was often in the UK, where he believed he was involved with extremist factions of Islam.

He believes he was involved with the terrorist organisation Al-Muhajiroun in Britain.

“I didn’t know that he was in Iraq, actually, but I thought he might be somewhere in the UK.

“I had no idea he was in Iraq until I heard that [he had died],” he added.