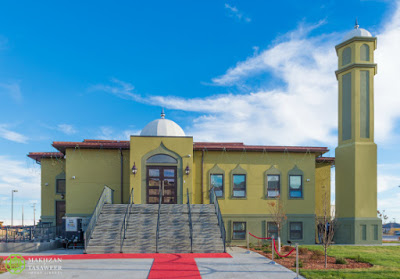 His Holiness remarked that Ahmadi Muslims in Canada were extremely fortunate as they lived in a country where they could build Mosques and freely practice their faith, whereas Ahmadi Muslims living in Pakistan were unable to do so.Â

Upon arrival, His Holiness officially inaugurated the Mosque by unveiling a commemorative plaque and offering a silent prayer in thanks to God Almighty.

His Holiness then delivered the weekly Friday Sermon from the newly built Mosque in which he outlined the true and entirely peaceful objectives of Mosques.

â€œWhilst certain Muslims are busy in spreading disorder in the world, Ahmadi Muslims are dedicating their time and wealth for building Houses of God. Ahmadi Muslims are acting in accordance to saying of the Holy Prophet Muhammad (peace be upon him) who said that whosoever builds a House of Allah in this life, builds a house for himself in heaven.â€

Hazrat Mirza Masroor Ahmad continued and said that the sacrifices made by Ahmadi Muslims were in order to attain the pleasure of Allah and to dispel misunderstandings about Islam.

â€œThe sacrifices by Ahmadi Muslims are for the sake of informing the world that Mosques and the teachings of Islam are not the cause of disorder in the world, rather they are a means of bettering ourselves in this life and in the Hereafter. They draw mankind towards loving their Creator and His Creation.â€

His Holiness remarked that Ahmadi Muslims in Canada were extremely fortunate as they lived in a country where they could build Mosques and freely practice their faith, whereas Ahmadi Muslims living in Pakistan were unable to do so.

â€œOften Ahmadi Muslims in Pakistan write to me in great distress asking for prayers that the laws change so that they can build Mosques or even halls where they can offer their prayers in congregation. Currently, they are not even permitted to build a room with an extended place for the Imam to stand in and so Mosque features such as minarets and domes are out of the question. In fact in some areas the conditions are so harsh that Ahmadi Muslims cannot even construct buildings that face towards Mecca.â€

His Holiness said that at a time where materialism was increasingly dominant, it was the duty of Ahmadi Muslims to inform others about the blessings of spirituality and religion.

â€œAt this moment in time, the majority of the world considers material progress as its sole objectiveâ€¦ In such times, it is the responsibility of Ahmadi Muslims to inform the world that the pursuit of materialism cannot bring eternal joy or contentment. Rather, the true and everlasting means to happiness and peace is attained by fulfilling the rights of God.â€

His Holiness said that the Mosque was bound to spark interest amongst the local population and that the local people would take note of the conduct of those who attended the Mosque. Therefore, it was incumbent upon Ahmadi Muslims to exhibit excellent moral conduct and righteousness at all times.

â€œMay Allah the Almighty enable our children to understand that the sacrifices made by their parents, the Mosques that they built, promoting the true teachings of Islam and the moral and spiritual guidance they gave to their children is in actuality the real wealth their parents left behind for them. May Allah enable the future generations to also inculcate this conviction within their children too.â€