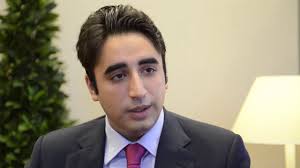 In response to a tweet saying that Clinton was on her way to becoming the president of the ‘most powerful country in the world’, Bilawal expressed hope that it was the case, using the popular hashtag #ImWithHer in a display of solidarity.

Bilawal’s show of support comes just a day before the US election is set to take place Nov 8.

Hillary Clinton could become the first American woman elected president, breaking the ultimate glass ceiling after having become, at the Democratic nominating convention in July, the first female candidate for a major party.

Clinton has come under fire for her speeches to Wall Street and the use of a ‘home-brew’ email server which was used to send at least 22 top secret emails.

Her Republican opponent Donald Trump has not hesitated to draw on stereotypes of women, describing the former first lady, New York senator and secretary of state as weak and lacking stamina.

Based on its analysis of media endorsements, electoral trends and opinion surveys, Dawn understands that Democrat Hillary Clinton is more likely than her Republican rival Donald Trump to win the presidential election on Tuesday.

The American national average of all polls collected on Sunday gives Clinton less than two-point lead, her 46.6 points against Mr. Trumpâ€™s 44.8. In favourability rating, she leads Mr. Trump by 5.4 percent. But this is not comforting as both are still in the negative zone, her minus 13.8 against Mr. Trumpâ€™s minus 19.2.