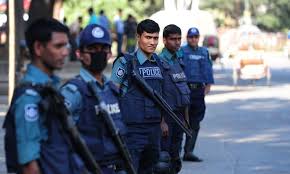 DHAKA: Police in Bangladesh have arrested dozens of people following fresh violence against Hindus, a senior officer said on Sunday, after a spate of attacks prompted concerns the authorities were not doing enough to protect the countryâ€™s biggest minority.

Hindu homes and temples in the Brahmanbairs district of eastern Bangladesh have come under attack during the last week, after a local youth allegedly shared a Facebook post that Islamic hardliners said denigrated Makkahâ€™s Masjid al Haram.

Muslimâ€™s protested and demanded action against the Hindu youth, who denies sharing the post. Police arrested the youth for hurting religious sentiment, but the arrest failed to defuse tension and quell the rioting.

Abu Zafar, the officer in charge of Nasir Nagar police station in the district, told reporters that so far 53 people had been arrested on suspicion of involvement in attacks.

Attacks on Hindus, who make up around eight percent of the population, and other religious minorities are not uncoÂ­mÂ­mon in this mostly Muslim country, but the scale of the recent anti-Hindu violence is unusual.

Bangladeshâ€™s Human Rights Commission has launched an investigation into the attacks.