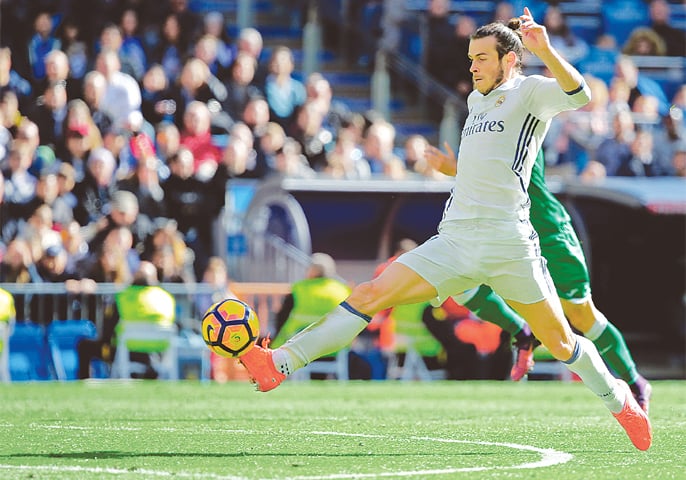 MADRID: With Karim Benzema out injured and Cristiano Ronaldo playing below expectations again, Gareth Bale came through and got the job done for Real Madrid.

Bale scored a pair of goals just before halftime to lead Real to a 3-0 win over Leganes on Sunday, securing the La Liga lead for his team ahead of the city derby against Atletico Madrid.

Alvaro Morata, replacing Benzema in the starting line-up, sealed Realâ€™s victory with a second-half goal at the Santiago Bernabeu Stadium.

â€œAn easy game doesnâ€™t exist and you saw that the first-half was difficult for us,â€ said Real boss Zinedine Zidane. â€œOnce you score a goal it is a different game and we controlled the match much more in the second-half.â€

Real reached 27 points, five more than champions Barcelona who travel to fourth-placed Sevilla later on Sunday. Atletico, who lost 2-0 at Real Sociedad on Saturday, are currently third with 21 points from 11 matches.

Real play against Atletico at the Vicente Calderon on Nov 19, following the international break.

Reeling from a chaotic midweek 3-3 draw at Legia Warsaw in the Champions League, Real got off to a slow start against neighbours Leganes, but Bale put them in charge in the 37th minute.

The Wales international, who signed one of the most lucrative deals in football history on Monday to keep him at the European champions until 2021, raced onto a through ball from Isco that split the visiting defence and rounded goalkeeper Jon Serantes to tuck the ball inside the near post from a tight angle.

Bale then cashed in on poor defending from a free kick to hit the second on the stroke of halftime, just beating Serantes to the loose ball from close range and Morata got Realâ€™s third goal from inside the area after a pass by Toni Kroos in the 76th.