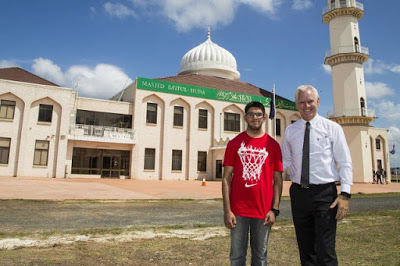 Ahmadiyya is a modern sect of Islam founded on the principle of â€˜love for all, hatred for noneâ€™. It teaches that prophets of many religions all point to the same God.

The teacher became the student when Baitul Huda formally opened its doors to the public recently.

The Ahmadiyya Muslim mosque hosted an open day on Saturday, October 29, after being inspired by the Lebanese Muslim Associationâ€™s National Mosque Open Day.

The day proved the perfect opportunity for Kellyville High School student Naosheyrvaan Nasir to invite his teacher David Lamley to learn more about his religion.

â€œThis to me looked like a golden opportunity […] and it turned out to be a success,â€ Naosheyrvaan said.

â€œI just realised heâ€™s the kind of person who would be interested in the different faiths and cultures of different people, so I thought it might be good to bring him along and show him what I do.â€

Naosheryvaan, 15, said in an age when information and disinformation is spread easily through the internet, face-to-face contact can be a better way to disprove some common misconceptions, including that women and non-believers are not allowed inside the mosque.

The teenager said he enjoys the opportunities he is afforded by being part of the Ahmadiyya youth.

â€œIâ€™ve been part of activities such as Clean Up Australia Day, National Tree Plantation Day and Red Cross door knock appeal. I donâ€™t think I would have had the courage to step up and go on my own if it wasnâ€™t for the support the community has.

â€œItâ€™s to me a sense of belonging and itâ€™s just a really great feeling. Itâ€™s a really good social circle to be a part of.â€

Ahmadiyya is a modern sect of Islam founded on the principle of â€˜love for all, hatred for noneâ€™. It teaches that prophets of many religions all point to the same God.

Ahmaddiya Muslim Association Australia president Imam Kauser said the open day was an important opportunity to break down barriers between Muslims and non-Muslims.

â€œIslam is the most misunderstood religion these days,â€ he said. â€œThey think that Muslims are only the terrorists. We wanted to let them know that Islam is nothing but peace.

â€œWe are Australian, we are very loyal to the country, and we will do our best for the security of this country. We are very thankful to Australia.â€

â€œSharing is caring, of course. We wanted to let them know what we believe, what we practice and how many things are common in all religions.

â€œWe should be talking about the commonalities rather than the differences.â€

The Imam said the mosque is always open to the public but it was good to have a formal open day for those who have not visited before. He is hoping to make the day an annual tradition.