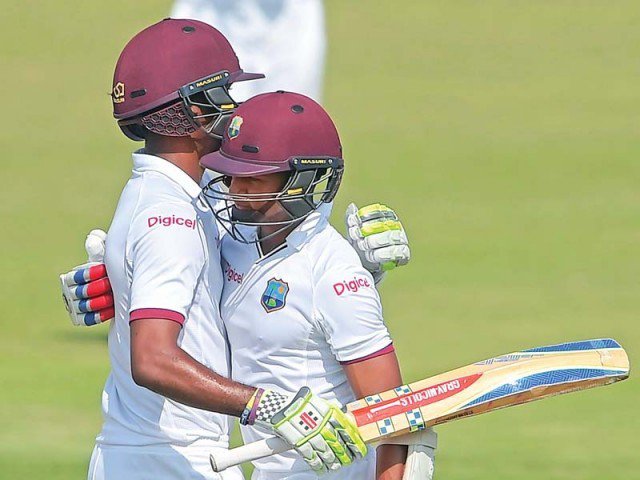 West Indies denied Pakistan a record rout in a bilateral series by winning the third and final Test by five wickets in Sharjah, UAE yesterday.

After getting whitewashed 3-0 in the T20I and ODI series, West Indies ended their 45-day tour on a high after claiming their first win.

Kraigg Brathwaite was the star of the show in the second innings as well as becoming the first-ever opening batsman to go unbeaten in both innings of a Test.

After carrying the bat with an unbeaten 142 in the first innings, the right-hander led his team to the 153-run target by scoring 60 not out in the second innings. Shane Dowrich also scored 60 as Jason Holderâ€™s men scored the remaining 39 runs without losing any more wickets on day five.

The win against Pakistan was Holderâ€™s first as captain and the first for the West Indies against a top-eight side outside their home since 2007.

Misbahul Haqâ€™s feat of surpassing the great Imran Khan as Pakistanâ€™s longest serving captain in the format with his 49th match as skipper ended in dejection.

â€œItâ€™s always disappointing to lose a Test,â€ the Pakistan captain told reporters in Sharjah after the defeat. â€œRecords donâ€™t matter more than wins or a good performance.â€

Misbah blamed the batsmen for the loss. â€œOur batting was not up to our usual standards in both innings,â€ he said. â€œThe bowlers also got little support from the fielders. West Indies played well throughout the match and were more disciplined.â€

The 42-year-old said his side had not relaxed but did admit they might have gotten a little complacent.

â€œWe are among the top teams in Test cricket and our reputation does not allow us to relax. [But] maybe we did not respect our opposition and made mistakes in the match,â€ said the captain before backing the team to bounce back in the forthcoming series against New Zealand.

The veteran also praised man of the match Brathwaite. â€œBrathwaite won the Test for the West indies. His temperament was exceptional. This West Indies team only lacks experience and they are improving after every game.â€

Defeat not appalling but Pakistan need to fix issues: Salahuddin

Former Test cricketer and chief selector Salahuddin Ahmed said there was no need to panic.

â€œAfter winning so many matches in a row, losing isnâ€™t that bad,â€ Salahuddin told The Express Tribune. â€œPakistan made mistakes in batting but West Indies should also be given credit. They got some impressive individual performances. Brathwaite and Dowrich played well under pressure while leg-spinner Davendra Bishoo was outstanding throughout this series.â€

Sallu pointed out that Pakistan faced problems in dealing with the shorter pitched stuff.

â€œCoach Mickey Arthur needs to work on the batsmen facing short balls on an urgent basis,â€ he said. â€œOn a Sharjah pitch which is one of the slowest tracks around, the batsmen struggled against short balls from fast-bowlers who are not very quick. If the issue is not addressed, Pakistan may face problems in New Zealand and Australia where they will be up against better pacers on pitches offering more bounce.â€

five-wicket, for Pakistan, in whites, No whitewash, West Indies, win