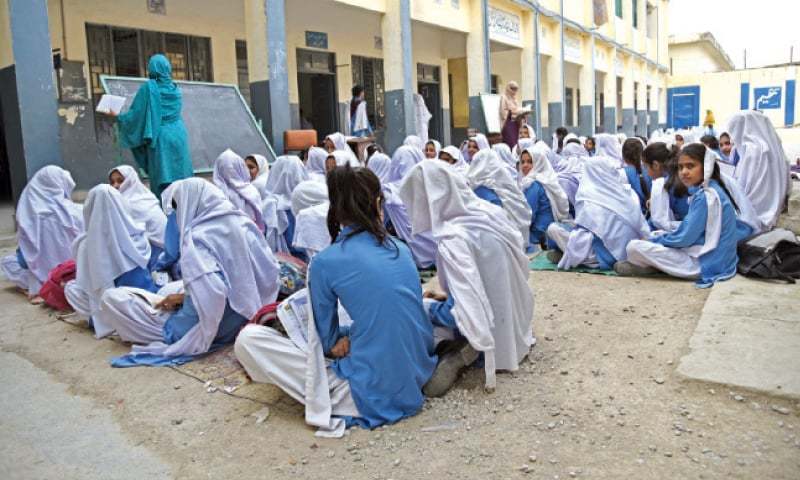 ISLAMABAD: Hundreds of students at the Islamabad Model School for Girls Sangjani (I to X), Tarnol section, study under the open sky and sitting on dusty rugs on the ground.

The school, one of the most neglected in Islamabad, enrols around 900 students and accommodates them in 11 classrooms. Four classes are held under the open sky while two of the classrooms do not have furniture.

The school was established in 1954 by the Punjab government and handed over to the federal government in the 60s. In 1992, the school was upgraded from the primary to middle level and in 1996 it was made a high school without improvements to the schoolâ€™s infrastructure.

According to teachers of the school, the over 900 students are taught by 17 teachers, which makes the teacher to student ratio 1:52. They said one of the classrooms was accommodating 77 students due to the shortage of space.

There are only 11 classrooms to accommodate 900 students, who are taught by 17 teachers

Though the school does have a computer lab with 18 computers, there is no computer teacher or lab incharge and there is just one science teacher.

â€œAs there is no computer teacher, we do not offer computer as a subject to class 9 and 10 students,â€ one of the teachers said.

A fourth grader, Pakeeza Bibi, said sitting on the ground during classes was distracting and that sitting cross-legged for long was also painful.

An eighth grader, Fouzia Sadiq, who attends classes under the open sky, said it was the governmentâ€™s responsibility to provide the school with basic facilities.

â€œSitting on the rugs is humiliating but we donâ€™t have another option,â€ she said.

In December last year, the Prime Ministerâ€™s Education Reforms Package was initiated which has so far proved to have brought about cosmetic changes, and that too mainly in 22 schools.

â€œI do not understand why Federal Department of Education (FDE) and the Capital Administration and Development Division (CADD) are only focusing on cosmetic changes in 22 schools instead of providing others with classrooms and furniture,â€ said an FDE official.

â€œSome of the people who are dealing with the education sector of Islamabad know nothing about education. Providing furniture and extra rooms should have been a priority under the prime ministerâ€™s reforms,â€ said Malik Ameer, the president of the Federal Government School Association.

PML-N local leader and Deputy Mayor Islamabad Syed Zeshan Naqvi agreed that the Sangjani schoolâ€™s condition was pathetic and that the FDE and CADD should provide all schools with the basic facilities. He added that the government was committed to improving all the 422 educational institutes in Islamabad.

When asked, coordinator Prime Ministerâ€™s Education Reforms Programs and Director Model Colleges FDE Dr Tariq Masood said the government was set to improve the next 200 schools and that the Sangjani school was one of them.

â€œIn the first phase, we improved 22 schools and the second phase will see 200 more schools being improved,â€ he said.

â€œWe are moving according to a plan. The CADD minister met the finance minister to ask for an early release of the funds, so we should start work soon,â€ he said.

Even after they were â€˜remodelledâ€™, students of the first 22 schools to be improved are still studying under the open sky due to a shortage of classrooms including those of the girls school Kot Hatyal and Sohan schools.

When the issue was highlighted in the media, the government decided to construct around 70 new classrooms in the 22 schools. â€œThe construction of these classrooms is nearly complete,â€ said Dr Masood.

at Islamabadâ€™s, forced to study, in the open, most neglected, School, Students