Senate body unhappy with use of NTS for all recruitment 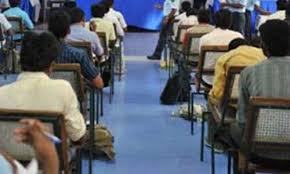 Senate body unhappy with use of NTS for all recruitment

ISLAMABAD: The Senate Standing Committee on Communications on Thursday expressed annoyance over the appointment of government employees through the National Testing Service (NTS).

The members demanded an audit of the service since 2002. They also suggested that steps should be taken to decrease the fees the NTS was charging from candidates.

The meeting, chaired by Mohammad Daud Khan Achakzai, was informed by Secretary Establishment Division Tahir Shahbaz that the NTS was a private organisation.

â€œThe federal governmentâ€™s recruitment policy 2014 states that all inductions should be made through some testing agency. The Supreme Court is not bound to follow any policy formulated by the government but it is also using the NTS for recruitments,â€ he said.

Though the Federal Public Service Commission (FPSC) is the most credible testing service, due to capacity issues it is only being used for the appointment of gazetted officers (BPS-17 and above). The FPSC takes one-and-a-half years to complete the process of the Central Superior Services examinations. So how it can be engaged for appointing all the government employees, he said.

But the official also said government departments were not bound to utilise only the services of the NTS. There are a number of testing services and a process of bidding has been introduced to select one of them.

Senator Kamil Ali Agha said even security agencies were using the NTS for appointment of their employees. As it has been confirmed that the NTS is a private organisation, it should not be engaged for the selection of candidates to avoid any scandal.

â€œTens of thousands of applications are submitted for each post and a majority of the candidates are dropped during the short listing. Departments should make their own boards for hiring employees in a transparent way,â€ he said.

Senator Kalsoom Perveen said there was a ruling of the Senate chairman that the degree of the NTS head was fake.

â€œMoreover, the NTS gives 30pc marks for the personality of a candidate. It seems it wants to hire Shah Rukh Khan or Aishwarya Rai. I know a student who got position in the board exam but could not clear the NTS test. It is strange that graduates are conducting exams of all the subjects and departments. Moreover, the candidates are asked irrelevant questions,â€ she said.

She said the audit of the NTS should be carried out from the year 2002. However, the NTS claims that its record had burnt. The NTS along with a courier service has been minting money because candidates are supposed to send their documents to the NTS through a particular courier service.

Government departments such as Pakistan Post should be involved in the process, she said.

Senator Usman Khan Kakar said all the appointments should be done through the FPSC because the commission was answerable but the NTS was not.

Senator Sajjad Hussain Turi said the NTS test had even been made mandatory for admissions to medical and engineering colleges.

He suggested that only marks obtained by a student in the FSC and SSC exams should be considered for the admissions.

Chairman Achakzai said it was unfair that the candidates were forced to pay fees throughout the year for different posts just to know at the end that they had been dropped.

Chairman National Highway Authority (NHA) Shahid Ashraf Tarar also agreed that candidates and their parents suffered because of financial losses and suggested that a mechanism should be adopted to decrease the financial burden on the candidates.

The NHA chairman informed the meeting that as per the recommendations of the committee, the recent increase in the motorway toll tax had been withdrawn on Thursday.

â€œOn M1 (Peshawar to Islamabad) each car will be charged Rs210 while Rs90 will be charged on M3 (Pindi Bhattian to Faisalabad) and Rs90 on M4 (Faisalabad to Gojra). However, as M2 (Islamabad to Lahore) was constructed under the build, operate and transfer (BOT) basis, a mechanism on how to reduce the tax is being considered,â€ he said.

The members suggested that the additional amount received from the motorists should be refunded. But Mr Tarar said around Rs40 billion were required for the maintenance of roads each year. So the amount will be spent on repairing of the roads.

body unhappy, NTS, recruitment, Senate, with use of