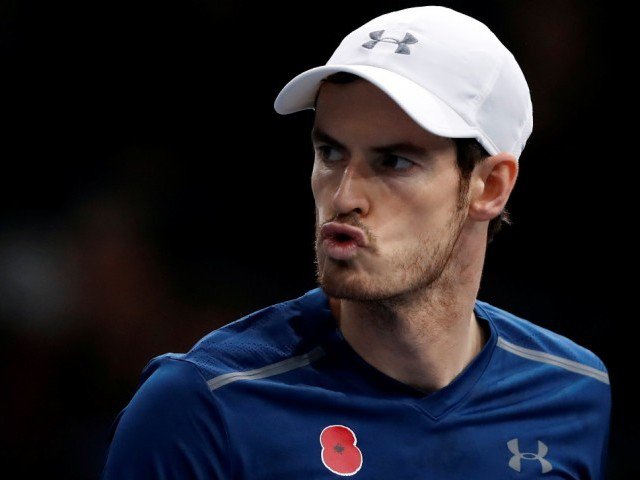 Andy Murray stepped up his assault on Novak Djokovicâ€™s world number one ranking by thrashing Lucas Pouille to ease into the quarter-finals of the Paris Masters on Thursday.

Murray reeled off the final eight games as he dispatched French 13th seed Pouille 6-3, 6-0 to extend his winning streak to 17 matches.

â€œI thought I returned well today. I had chances in almost all of his service games throughout the match. And on this surface, obviously when itâ€™s a bit quicker, thatâ€™s good,â€ said Murray.

â€œI felt tired (this morning) because it was a late finish (from Wednesday night when Murray defeated Fernando Verdasco) but I felt all right once I got going,â€ added the second seed, having equaled last seasonâ€™s career-best total of 71 wins.

Murray, runner-up in Paris last year, will next meet Tomas Berdych who beat Gilles Simon 6-4, 6-3, as he bids to end long-time rival Djokovicâ€™s 122-week run at the top of the rankings.

The Scot has won three straight tournaments â€” in Beijing, Shanghai and Vienna â€” to drastically close the gap on Djokovic and must at least reach the final in Paris to stand a chance of displacing the Serb.

Djokovic recovered from an early wobble to defeat Grigor Dimitrov 4-6, 6-2, 6-3 as he tries to keep Murray at armâ€™s length.

The record four-time champion will remain above Murray at the top of the rankings if he makes Sundayâ€™s final in the French capital, but Djokovic was made to sweat by the Bulgarian. He fell behind after losing serve twice in succession in an hour-long first set and then required medical treatment on his right knee after landing awkwardly while stretching for a return.

However, Djokovic kept his calm as the errors mounted from Dimitrov to claim the second set with relative ease, and he broke early in the decider to wrest away control of the match. â€œHe started off the match very well. I knew it from the beginning that itâ€™s going to be tough. Thatâ€™s all I can say,â€ said Djokovic, who swiftly dismissed any concerns over his knee. â€œNo problem, thankfully. Just an awkward footing in that point, but all is well.â€

The top seed next takes on Marin Cilic, who earlier punched his ticket to the Tour finals in London with a 6-3, 7/6 (11/9) defeat of David Goffin. â€œHeâ€™s in great form. He has a big serve that he relies on a lot,â€ Djokovic said of Cilic. â€œHe loves, I guess, this kind of very quick conditions. He won Cincinnati in a very similar, even faster conditions.â€

Cilic claimed the penultimate spot in the eight-man field for the prestigious November 13-20 event in London after seeing off Goffin on his sixth match point. â€œThat was the goal of the season for me, to reach the Tour finals in London,â€ said Cilic, who eliminated Goffin from contention in the process.

The 2008 Paris champion must land another title in the French capital to have a shot at returning to the Tour finals for the first time since 2012. He goes on to play Milos Raonic after the Canadian shook off a slow start against Uruguayâ€™s Pablo Cuevas to advance 4-6, 6-1, 6-2.

American Jack Sock matched last monthâ€™s run to the quarters in Shanghai as he dumped out home hope Richard Gasquet 6-2, 3-6, 7-5. He will meet compatriot John Isner in the next round after the latter halted the run of German qualifier Jan-Lennard Struff, winning 6-4, 6-7 (4/7), 6-3.

Berdych is hoping to make the Tour finals for a seventh consecutive year. The world number 11 trails Dominic Thiem, who lost in the second round, in the race for the remaining London berth and needs to reach at least the semis to leapfrog the Austrian.