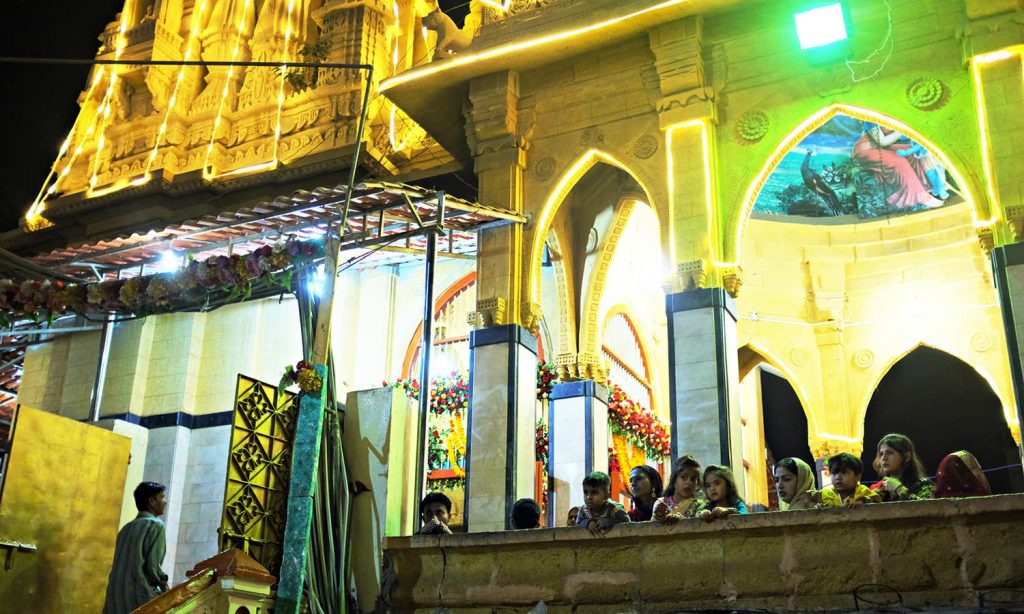 Karachi is often termed as a dull city, sometimes even dangerous. In a city of 20 odd million, there is a dearth of public spaces and limited avenues for cultural activities.

The much praised diversity has also come under scrutiny, with minorities migrating to greener pastures abroad and those staying back choosing to remain discreet.

The uncertain security situation restricts religious festivities of non-Muslims as well as the nurturing of our communities’ collective imagination. Festivals come and go but they donâ€™t manage to make headlines for the right reasons.

But anyone who has lived in Karachi for some time would know that the city opens up to its denizen gradually. There are pockets across the city that light up annually with festivities, religious and cultural, showing a fascinating side of the place that doesn’t make the news.

Last week, my friend visiting from London asked me if I had any plans for Diwali.

I suggested we visit the Shri Swaminarayan temple, the biggest remaining Hindu temple in Karachi.

Diwali, the festival of lights, symbolises the victory of light over darkness, good over evil, knowledge over ignorance.

As we drove towards Bunder road, I got a call from a novelist friend who was in the vicinity and wanted to come along too.

I told him to reach the temple directly and keep his hazard lights on. As I looked for his car on Bunder road, I could not help but notice a sizeable presence of police and Rangers outside the temple.

We formed into a group, seven curious souls, mostly Muslims, attracted by the lure of the unknown and the unexpected.

The entrance to the temple is through an arch which was crowded by the time we reached. Its central location, ample parking and large courtyard makes Shri Swaminarayan an ideal location for such events.

The festivities were in full swing by the time we got inside the compound. A poster near the entrance commemorated the victims of the recent terrorist attack on the police academy in Quetta.

We followed the crowd and soon found ourselves in front of the 200-year-old temple which was garlanded with lights and flowers.

People were dressed in different hues of red, yellow and saffron, as they queued up to pray inside the temple.

Outside the main temple, children were lighting up firecrackers, some of them loud, leaving a colourful trail in the night sky.

We stayed there for a bit, fighting for space as more people joined the party and more firecrackers went off.

We reassembled at the main gate and decided to take a walk through the neighbourhood to look for Rangoli â€” the colourful patterns created on the floor with sand, rice or flower petals.

The houses in the templeâ€™s neighbourhood were decorated with fairy lights and clay lamps. The firecrackers went on continuously. As we walked ahead to find a quiet spot, we noticed Rangoli outside several houses.

On the evening of Diwali, people light up clay lamps, make Rangoli and pray to Lakshmi â€” the goddess of wealth and prosperity.

According to their belief, Lakshmi visits peopleâ€™s home and bestows blessings upon them.

From Shri Swaminarayan, we went to Narayanpura. Located in Ranchor Lines, it is perhaps the epitome of Karachiâ€™s diversity.

A dingy, congested neighbourhood of 10,000 people, Narayanpura is home to Hindus, Sikhs and Christians. People participate in one another’s religious festivities regardless of their creed.

As we reached the neighbourhood, I could smell the foul stench coming from the heaps of garbage everywhere.

The hard-working people living in Narayanpura work in municipal sanitary services but their own neighbourhood lacks basic sanitary infrastructure.

There were hardly any street lamps and we had to carefully watch our steps in the dark. I noticed a Rangers van and a few policemen lazing around at the neighbourhood’s entrance.

The area has remained largely peaceful apart from when it was set ablaze by a mob following the Babri Masjid incident in India.

We stepped inside the gate where children noticed our cameras and posed for photos, wanting us to film them as they set off the firecrackers.

Their parents were observing their antics while standing in their balconies.

The neighbourhood is one of the most destitute in the city but they knew how to celebrate and had decorated their homes for the occasion.

We were invited to one of the rooftops. As we observed the view from there, children surrounded us with smiles on their faces, wishing us a happy Diwali.

Pakistani flaglets flapped in the backdrop, reminding us how minorities still have to prove their loyalty to the country more than any other communities.

It was midnight by the time we stepped out of the neighbourhood’s main gate. We bode farewell to the people of Narayanpura and headed back to our side of the city .

None of us spoke for some time, as we absorbed the surreal night out we had just experienced in Karachi.

city, experience, How my, I never knew, Karachi, of Diwali