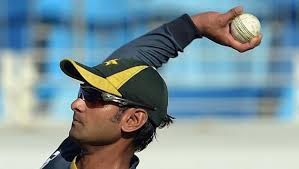 “PCB had contacted ICC and requested to fix a date for re-testing of bowling action of Hafeez,” a top PCB official told DawnNews.

“Bowling action test is likely to happen in Loughborough England,” the official added.

In July 2015, he was banned from bowling in international cricket for 12 months after his action was found to be illegal for a second time since November 2014.

PCB had hired a bowling coach Carl Crowe to help Hafeez correct his bowling action before taking the bowling assessment test in England but he decided against taking any test because of his fitness issues.

Hafeez was dropped from Pakistan squad for series against West Indies as he was experiencing injury and form issues.

He was also not considered for the two Test match series against New Zealand starting this month.