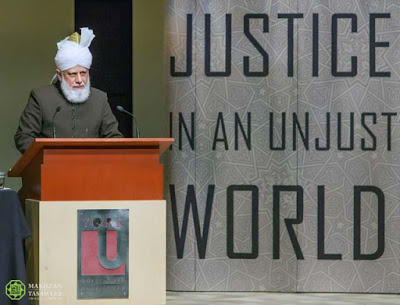 â€œAs a Muslim leader, it is a source of grief to me that the disorder taking place today is centred around so-called Muslims.â€

History was made when Hazrat Mirza Masroor Ahmad, the leader of the Ahmadiyya Muslim community, addressed media, professors and guests at Keele campus last week.

In his speech, Ahmad discussed religious extremism, religiously motivated violence and the failings of international politics and organizations like the United Nations.

Well-organized and on a media blitz, the Ahmadiyya Muslims Student Association at York, or AMSA, hosted the Caliph at an event called â€œJustice in an Unjust World.â€ He continues his six-week tour that has seen him crisscrossing the country, from Ottawa, where he met with Prime Minister Justin Trudeau, to western Canada. 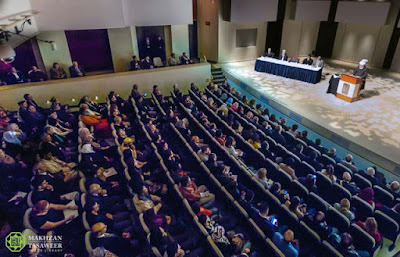 Ahmad mounted the stage with his eyes lowered, speaking softly, but resolutely. His message, echoing solemnly through the cavernous Tributes Communities Recital Hall: love for all, hatred for none.

He noted that rapidly advancing technology, including electronics and communications, has made life easier and more comfortable, but at a terrible price. Despite rapid progress, modern technology and weaponry, including nuclear weapons, carry great potential for destruction, jeopardizing peace every day.

Peace is also jeopardized in conflict zones that become breeding grounds for terrorism, while external powers provide overt and covert aid to rebel groups and embattled regimes.

â€œAs a Muslim leader, it is a source of grief to me that the disorder taking place today is centred around so-called Muslims,â€ said Ahmad. In perhaps his most controversial statement, Ahmad said that extremism occurs when people deviate from Islamic teachings. Islam represents peace, security and love, according to Ahmad, while â€œso-calledâ€ Muslims spread terror networks.

On the other hand, critics of religion like Christopher Hitchens have argued that religious teachings are least partially responsible for violence and discord.

First-year administrative studies student Sarah Dard, who attended the event, believes violence is not a result of religious teachings.

â€œWhat I believe is that each time an atrocity takes place and is claimed to be in the name of religion, our duty as believers is to perpetuate the true teachings of our faith and spread peace with even more fervor; that is our strongest defence,â€ she adds.

â€œWe believe the Holy Qurâ€™an does not at all contain any unethical writings nor does the religion of Islam promote religious violence,â€ says a spokesperson for the Caliph.

Third-year kinesiology and psychology student Ilia Azari says every religion should be held accountable for the good and the bad they may produce in the world.

Ahmad also discussed the â€œgolden ruleâ€â€”that people should desire for others what they desire for themselvesâ€”noting that itâ€™s very easy to say one desires the best for others, but things are more difficult in practice.

â€œ[Most] people tend to prioritize their own interests and welfare over and beyond the rights of others. This is true at an individual and also true at a collective and national level.â€courtesy of alislam.org