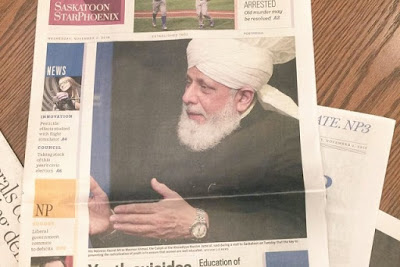 He called for governments to listen to the sermons in the mosques and see the activities of the clerics. The Caliph invited members of the media and police as well to listen to his sermons.

The spiritual leader of up to 20 million Ahmadi Muslims is emphasizing the importance of educating women to prevent the radicalization of youth.

If mothers are well-educated â€” religiously and with secular education â€” and well aware of the â€œnegative aspectsâ€ of radicalization, â€œthey can save their children,â€ he said.

When asked about the role mosques play in preventing radicalization, the Caliph said people are not being radicalized in Ahmadi mosques.

He called for governments to listen to the sermons in the mosques and see the activities of the clerics. The Caliph invited members of the media and police as well to listen to his sermons.

â€œThe government has to be vigilant,â€ he said.

The 66-year-old Caliph made his first visit to Saskatoon since his election as the fifth caliph in 2003. He met with members of the Muslim community, including Syrian refugees and the local Ahmadiyya Muslim Jamaâ€™ at on Tuesday.

His visit coincides with the inauguration of Reginaâ€™s mosque on Friday. The Caliph is scheduled to attend the event.

Saskatoonâ€™s mosque, which is still under construction, is expected to be completed and to open in a month.

According to the Caliph, more than 1,500 Ahmadis now live in Saskatchewan and the community continues to grow.

He said people of all religions will be welcome in the new mosques. As far as worship is concerned, mosques are open for everybody who worships â€œone omnipotent God,â€ he said.

â€œIf a mosque is a house of God and you are Godâ€™s creation, why should we stop you (from) entering a mosque?â€

The mosque hall will be partitioned with an area for men and one for women. He emphasized that this does not mean women are deprived of their rights.

Religious rituals are conducted separately. During the time of the Prophet of Islam, men and women worshipped together â€” men in front, women behind, the Caliph noted.

â€œIt is not because â€¦ of the low status of the women. It is because worship time is the time you have the full concentration towards your creator, towards Allah, to God,â€ he said.

â€œAnd if women are standing there, quite a number of such people would not keep their concentration properly. Instead of worshipping or praying, they might see some charming girl on one side or the other side. This is why it is said girls should stand behind.â€

He said women also â€œfeel more comfortableâ€ if there is some partition in the same mosque, and if a woman thinks she is safe among men, she can stay among them. If not, and if she is a â€œtrue followerâ€ of the religion, then she would have to follow and worship separately, he said.

The Caliphâ€™s Canadian visit included a meeting with Prime Minister Justin Trudeau and an address to Parliament. The Caliph leads the Ahmadiyya sect from London, England, in exile from Pakistan. Ahmadis have faced persecution for their beliefs.

His visit has attracted attention on social media, with the hashtag #caliphincanada trending on Twitter for a time.

In a morning news conference, he praised Canada as a peaceful country. Canadians are tolerant due to the nationâ€™s multiculturalism, and Ahmadis donâ€™t face many challenges here â€” save for the â€œeconomic crisisâ€ faced by everyone, he said.

Throughout his tour of Canada, the Caliph has addressed the issue of peace â€” including when he spoke to Parliament in Ottawa earlier this month. When asked about the importance of his message of peace to Muslims, he said â€œIt is quite obvious. This is the message that you need today.â€

Spreading the â€œtrue message of Islamâ€ â€” peace and harmony â€” is also the way to address misconceptions about Muslims, he said.

Caliph doubts a Trump presidency would include anti-Muslim immigration measures

If Republican presidential candidate Donald Trump is elected in next weekâ€™s U.S. general election, he doubts Trump would implement the anti-Muslim immigration measures he spoke about earlier in his campaign, the Caliph said.

â€œThere are millions of Muslims living in the United States who will raise their voice against them. And they are not following any true leadership.â€

He alluded to the possibility that some clerics could be fuelled by such measures.

â€œIf it ever happens, itâ€™s going to be big chaos.â€