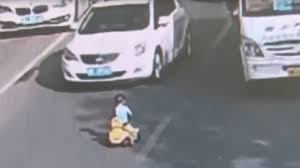 Video of a toddler riding his yellow toy car into oncoming traffic during rush hour in a city in eastern China went viral this week.

The footage shows cars and motorbikes weaving around the three-year-old child in Lishui City before a police officer comes to the rescue.

â€œIt was very dangerous with many large vehicles around him, so without a second thought, I rushed to the kid immediately and took him to the side of the road,â€ officer Wu Feng, who has been hailed as a hero on social media, told state television CCTV.

Tragic: Seven of a family killed in accidentÂ

Chinaâ€™s roads are among the deadliest in the world, with over 10,000 children under the age of 15 dying each year due to road accidents, according to the World Health Organization.