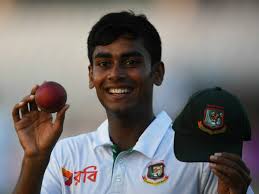 Bangladeshâ€™s teenage spin sensation Mehedi Hasan is to have a new home built for him on the orders of Prime Minister Sheikh Hasina after his match-winning heroics in the historic Test victory over England.

The 19-year-old off-spinner took 12 wickets in the second Test as Bangladesh wrapped up a 108-run victory in Dhaka on Sunday â€” their first ever Test triumph for the cricketing minnows over England.

Hasan had been living with his parents in a basic home in a working-class district of Khulna but Hasina, who is a keen cricket fan, told local authorities to build something more befitting a national hero.

While there was no immediate word from Hasan himself, Bangladesh Cricket Board chief executive Nizamuddin Chowdhury said it should help drive Hasan â€” who is the son of a taxi-driver â€” to greater heights.

â€œIt is a gift to the wonderboy from our premier for the brilliant performance in the Test series against England,â€ Chowdhury told AFP. â€œIt will surely inspire him to work hard and do better in the future.â€

Hasan, who only made his Test debut in the opening Test in Chittagong, was named both the man of the match after his performance in Dhaka and the man of the series.

The victory in Dhaka, which meant the series ended tied, sparked wild celebrations among Bangladeshâ€™s tens of millions of cricket fans.