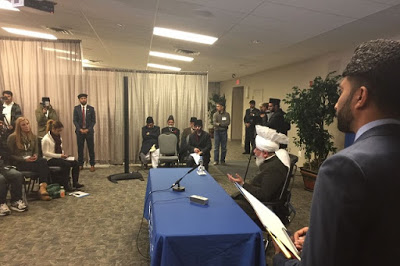 “When the mosque is open, then I hope neighbours and non-Muslim people living in this city would know much better about (our) message.”

In the quiet halls of Prairieland Park, families lined up for a rare chance to meet a revered religious leader.

His Holiness Hazrat Mirza Masroor Ahmad, the fifth Khalifa â€“ or Caliph â€“ of the Ahmadiyya Muslim community, was in Saskatoon for a special visit to mark 50 years of the faithâ€™s establishment in Canada.

Ahmad was elected to his lifelong position in April 2003. His visits usually involve an opening of a mosque or simply a chance to meet families in the community â€“ for Saskatchewan, itâ€™s both.

On Friday, the leader will be in Regina for the formal inauguration of a new mosque. Following the ceremony, the Caliph will lead Friday prayers, which will be broadcast to tens of millions of Ahmadiyaa Muslims worldwide.

Additionally, the trip also ramped up anticipation for the biggest mosque on the prairies, set to open just outside Saskatoon in the coming months.

â€œWhen the mosque is open, then I hope neighbours and non-Muslim people living in this city would know much better about (our) message,â€ the Caliph said.

People who practice the Ahmadiyya Muslim faith acquire knowledge from the Qurâ€™an and through the unified voice of the Caliph.

He directs them to the â€œtrue teachings of Islam,â€ promoting the message of love for all, hatred for none.

â€œIf people understand the true message of Islam, they appreciate it,â€ the Caliph said, adding the faith is not only rooted in prayer â€“ but also humanitarian service to others.

The Ahmadiyaa Muslim Jamaâ€™at Canada is an entirely self-funded religious organization, with more than 80 chapters spanning from Newfoundland to British Columbia.

â€œThey are very well-integrated into society. They are law-abiding people, they love their country,â€ the Caliph said.

The Amadiyaa Muslim faith is the fastest-growing religion in the world, with 500,000 people becoming members in 2016.

With that, the Caliph addressed the topic of radicalization, pointing out those who cause â€œchaosâ€ are a small number who do not practice the true nature of Islam. He also called on the media to â€œdo justiceâ€ by better reflecting the vast numbers of peaceful people of Muslim faith.

As for Donald Trump and the impending U.S. presidential election, the religious leader believes the businessmanâ€™s views will not take root.

â€œHeâ€™s representing some party, and partyâ€™s always have their manifestos,” the Caliph said.

â€œEven if he implements, there are millions of Muslims living in the United States who will use their voice against him.â€