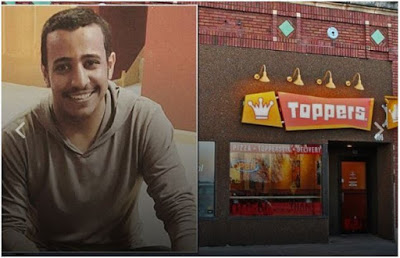 Hussain Saeed al-Nahdi, a 24 year old Saudi student studying in the US, was beaten to death by an unknown white man on Sunday evening.

Police are looking for a six-foot white man who is reported to have beaten a student from Saudi Arabia to death in Wisconsin.

Hussain Saeed al-Nahdi, 24, from Buraydah, was killed outside a pizza shop in Menomonie during the early hours of Sunday morning.

“This is a painful time on campus for everyone,” said Bob Meyer, chancellor of the University of Wisconsin-Stout, in a blog.

“My heart aches for Hussain Saeed al-Nahdi’s family, which received the awful information Monday afternoon that their son had been fatally injured in downtown Menomonie early Sunday.”

Nahdi died as a result of severe head injuries in hospital on Monday. Police had found him bleeding from the mouth and nose at around two o’clock on Sunday morning.

“On October 30 at approximately 2:11am, the Menomonie Police Department and Menomonie Fire Department were dispatched to the 400 block of Main Street East, near Toppers Pizza, for a report of a physical altercation.

“Upon arrival, officers located an unconscious male, bleeding from his mouth and nose.”

Islamophobic attacks have been increasing in the US over the past year. Earlier this month, a Pakistani boy decided to leave the country after he was beaten up on a bus for being a Muslim. Many have linked the increase to Donald Trump’s presidential campaign, where he has employed xenophobic language and suggested policies that target Muslims.