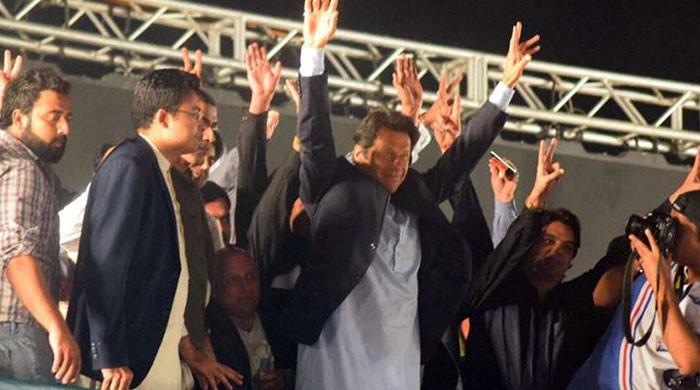 PTI workers and supporters had gathered at the Parade Ground in Islamabad for a celebratory rally after the party postponed its planned November 2 ‘lockdown’ following the apex court’s decision of appointing the inquiry commission.

Speaking during party â€˜celebratoryâ€™ rally in Islamabad, he said that Federal Information Minister Pervez Rashid was told to resign for his comments so a fair investigation can take place.

“The same is the case for you. You must also resign”, Imran Khan said of PM Nawaz.

â€œIf the NAB chairman has even the slightest bit of shame, he should resign after what the Supreme Court said. But these are all shameless peopleâ€, he added.

â€œPervez Khattak, why did I ask you to go back? Because I was afraid that blood of youth would be splitâ€, he said.

Once again criticising the Prime Minister and Chief Minister Punjab Shehbaz Sharif, he said: â€œNawaz Sharif, I am waiting for the day when you and your younger brother are in jailâ€.

He said that people protested in South Korea and Guatemala too but no one baton charged the protestors, saying that peaceful protest was the right of a free nation.

PTI chairman said that institutions were not working properly in the country, adding that Pakistan cannot progress without strong institutions.

He said that oppositionâ€™s job is to speak out against corruption.

Earlier, workers and supporters of the PTI gathered in Islamabad for a rally celebrating the Supreme Court’s decision of appointing an inquiry commission to probe the Panama Papers corruption allegations.

Speaking to Geo News earlier, Khattak said that the people of Punjab were his friends and he did not say anything against them. He said that he and his party workers were treated brutally in Swabi.

According to a spokesman for the Interior Ministry, 10,000 police personnel have been deployed as part of the security detail for the rally. The PTI leadership has officially informed Islamabad administration that the rally would conclude at 10 PM.

The rally is being held after PTI postponed its planned November 2 â€˜lockdownâ€™ of the federal capital. PTI chairman Imran Khan has claimed that one million people would attend the rally tonight.

Prime Minister Nawaz Sharif has been under growing pressure from opposition parties to hold an independent investigation into allegations of corruption against the prime minister’s family.

On Tuesday, the Supreme Court began hearing a case into the “Panama Papers” leaks and offered to form a commission to investigate revelations that Sharif’s children held offshore bank accounts.

“We are determined to resolve this issue. We will solve it and we will solve it as soon as possible. Now the highest forum in the country in regards to dispute resolution has taken up this matter, so now you hold your positions, please restrain,” Justice Asif Saeed Khosa, one of the five judges hearing the case, told the court.

The ruling was applauded by Khan, who held a press conference at his home on the outskirts of Islamabad to declare victory.

“I am so happy that the Supreme Court has directed the prime minister to present himself for accountability,” Imran told supporters in Bani Gala following the apex court decision.

The government also welcomed the court’s ruling. “Prime Minister Nawaz Sharif has said from day one that he’s ready for complete and transparent accountability,” said minister of state Miftah Ismail, adding he was confident the premier would be exonerated.

But the government claimed calling off the march was a face-saving measure by Imran. “I think PTI was unable to get a sizeable crowd together and felt under pressure to call off their lockdown and save themselves embarrassment. That is why they took this opportunity provided to them by the court and cancel their promised agitation,” said Ismail.

The move brought an anti-climactic end to what observers believed could have become a protracted confrontation, similar to a four-month sit-in led by Imran Khan in 2014.

But although Khan had repeatedly vowed to bring a million protesters to the capital, disruption had been thus far limited to a few areas around the city and to the Peshawar-Islamabad highway, where some 5,000 PTI supporters were blocked from entering the capital.