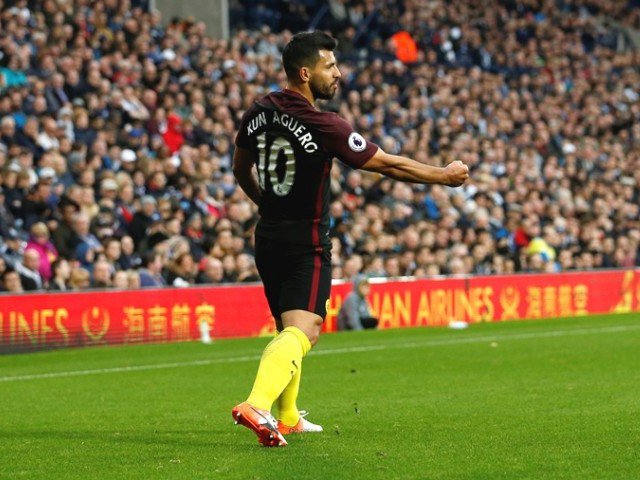 There is nothing between Sergio Aguero and Lionel Messi off the pitch, but in the Champions League, the Manchester City striker continues to walk in the Barcelona superstarâ€™s shadow.

Aguero was dropped for Cityâ€™s game at Barcelona on October 19 and by the time he came on, as a 79th-minute substitute, Messi had set his side en route to a 4-0 win with his 37th career hat-trick.

Aguero is expected to start when Barcelona visit the Etihad Stadium on Tuesday, having scored twice in Saturdayâ€™s 4-0 win at West Bromwich Albion, but manager Pep Guardiola believes he can help the striker to become even better.

Neymar success is down to Messi, says father

â€œHe is part of the history of this club and will be forever, but I would like to help him,â€ said Guardiola, who enjoyed stunning success with Messi at Barcelona between 2008 and 2012. â€œHe can still write the most brilliant pages in his career in this club. Heâ€™s one of the best, absolutely. But I want to help him be much, much better.â€

While Guardiola is thought to harbour reservations about Agueroâ€™s work-rate and overall contribution, he believes that â€œin the boxâ€ at least, he is on the same level as Messi.

Aguero and Messi have been close friends since they met while playing for Argentina at the 2005 Under-20 World Cup in the Netherlands.

Aguero, then playing for Independiente in his homeland, astonished his team-mates by asking Messi who he was, having not recognised the burgeoning star of the Barcelona youth team.

But they ended up rooming together and have been international room-mates ever since, Messi penning the foreword to Agueroâ€™s 2014 autobiography.

Aguero is a year Messiâ€™s junior, but in football terms, he was more precocious, making his Independiente debut aged just 15.

The pair began to cross swords regularly after Aguero joined Atletico Madrid in 2006 and might even have ended up playing in the same team.

Former Barcelona sporting director Andoni Zubizarreta revealed earlier this year that prior to signing Luis Suarez from Liverpool in 2014, the clubâ€™s number-one target had been Aguero.

Aguero joined City in 2011 and entered club folklore in his first season by scoring the 94th-minute goal against Queens Park Rangers on the seasonâ€™s final day that gave Roberto Manciniâ€™s men the title.

He has won four major honours at the Etihad and his brace at West Brom took him to 149 goals in the clubâ€™s colours, lifting him past City great Francis Lee.

Though frequently injured, Aguero has the best minutes-to-goals ratio in the Premier League era and former England striker Alan Shearer believes he is â€œthe one genuine world-class playerâ€ in the division.

But although Aguero is Cityâ€™s leading scorer in European competition, unlike Messi he has yet to leave an indelible mark on Europeâ€™s elite tournament.

Just two of his 23 Champions League goals have been scored in the knockout phase and he has never gone further than the semi-finals.

Aguero has hinted that he was sceptical about the hype surrounding Guardiola, telling Argentine radio that he asked Messi if the Catalan would show him â€œhow to kick the ball betterâ€.

But if Aguero is to scale the same heights as his international room-mate, it is likely to be in his interests to keep Guardiola onside.

Guardiola, a two-time Champions League-winner as a coach, has not always seen eye-to-eye with big-name strikers, as Samuel Etoâ€™o and Zlatan Ibrahimovic can testify.

In axing Joe Hart and Yaya Toure, meanwhile, he has demonstrated that he will not show undue deference to status at City.

While Aguero has scored 13 goals in 13 games this season, Guardiola has regularly exhorted him to â€œdo moreâ€, and there are signs that the penny may have dropped.

According to the BBC, the 28-year-old covered 10.2 kilometres (6.3 miles) against West Brom, which represented a huge leap from last seasonâ€™s average of 7.8km.