Pakistan dominate but India end up Nikkin it 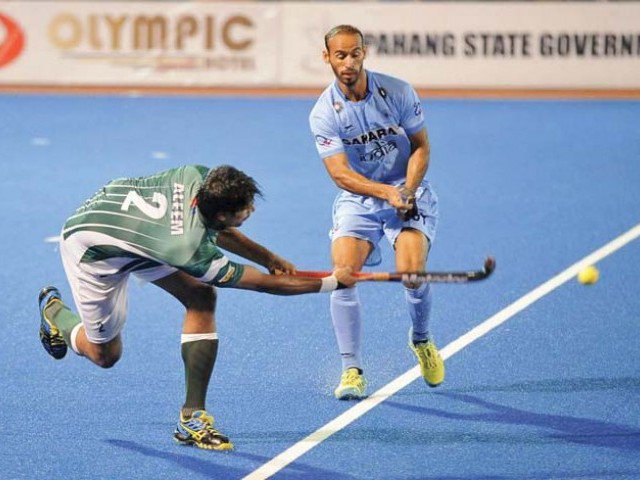 Pakistan dominate but India end up Nikkin it

Pakistan came close to pulling off a superb comeback against India in a nerve-wracking final of the Menâ€™s Asian Champions Trophy in Kuantan, Malaysia yesterday but ultimately lost 3-2 to the pre-tournament favourites courtesy of a late Nikkin Thimmaiah winner.

The Greenshirts had defied expectations to reach the final, showing some superb attacking verve in the process, and gave their fans a lot to cheer about as they came from 2-0 down to draw 2-2 going into the final quarter with all the momentum behind them. But in the end it was India who struck the decisive goal against the run of play to claim the win.

Pakistan, ranked 13th in the world, seemed nervous to begin with but settled in nicely and carved out two presentable opportunities in the first quarter. However, they were unable to score from either of them and their profligacy came back to haunt them when Indian skipper Rupinder Pal scored from a penalty corner in the 18th minute.

Indian midfielder Sardar Singh then found Ramandeep Singh in the 21st minute and the striker promptly crossed for Affan Yousuf to deflect home and make it 2-0.

Many would have been fearing a one-sided affair at that point but Pakistan were back in it just three minutes later as Aleem Bilal Ghumman made no mistake from a penalty corner, flicking the ball low into the bottom corner to give Indian goalkeeper Akash Chikte no chance.

Pakistan knew they had to come out and attack in the second half and that is precisely what they did, putting the Indians under pressure straight away.

Eight minutes into the half they were rewarded when Ali Shaan flicked the ball into the net to level the scoring and send the ample Pakistan support into raptures.

India were reeling at that point and Pakistan seemed the likelier side to score the winner but it was the Men in Blue who struck when Jasjitâ€™s aerial ball found Ramandeep, who claimed his second assist of the night when he found Thimmaiah inside the box to make it 3-2.

Amjad the hero as Pakistan set up final with India

Pakistan had a chance to level the scoring in the 53rd minute from a penalty corner but drag-flicker Tasawar Abbas failed to convert.

India managed to see out their slender advantage and claim their second Asian Champions Trophy to tie with Pakistan as the tournamentâ€™s most successful team.

Pakistan head coach Khawaja Junaid praised the energy on show by both sides. â€œBoth teams showed excellent skill on the ball and were much more composed than their last outing. It was a high-energy game and that was really impressive,â€ he said.

â€œOur players have started to improve with the experience they have gained from the tournament and will build on this in future tournaments,â€ he added.

Ali Shan, who scored the second goal for Pakistan, rued missed chances but was happy with the teamâ€™s performance. â€œWe did our best; we missed some early chances but Iâ€™m happy with the way we played under pressure,â€ he told The Express Tribune.

Meanwhile, former Olympian Waseem Feroz hailed the teamâ€™s effort against a better-ranked and more experienced side. â€œPakistan have not played international matches for a long time and India have players who have played more than 100 matches, so keeping than in perspective, Pakistan performed really well,â€ he said.Â

but India, dominate, Nikkin it, Pakistan