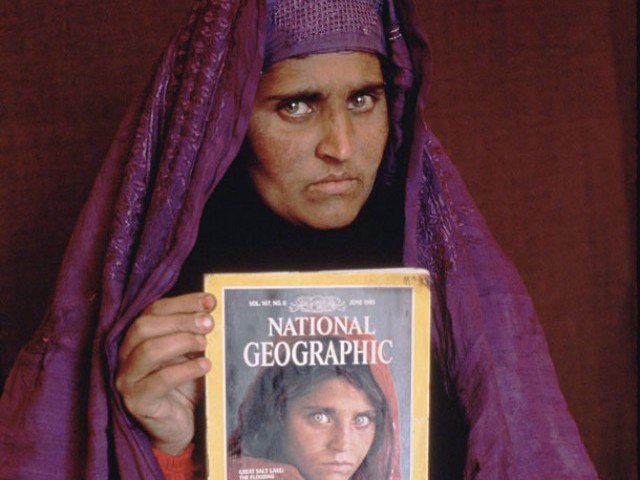 Afghan diplomats, who met the â€˜Afghan Mona Lisaâ€™ in a Peshawar prison on Monday, assured that she wouldÂ be freed on Tuesday, Afghan envoy Omar Zakhilwal said.

The Federal Investigation Agency (FIA) had arrested Sharbat Gula, now in her mid-40s, in Peshawar last week.Â The court is scheduled to hear her case on Tuesday.

The famous green-eyed, then 12-year-old, was first photographed in 1984 by National Geographic photographer Steve McCurry at the Nasir Bagh refugee campÂ situated on the edge of Peshawar whereÂ she was living with her sisters and grandmother.

Interior Minister Chaudhry Nisar Ali Khan said he has urged the FIA to facilitate the release of the Afghan woman on humanitarian grounds.

The Afghan ambassador in Islamabad saidÂ that a team of Afghan diplomats, Nasim Kakar and Abdul Hameed Jalili, met Gula in Peshawar prison and assured that she would be â€œacquittedâ€.

The most recognised and famous photographÂ once again attracted the world media attention after her arrest over fraud charges.

Afghans are the view thatÂ Gula belonged to Pachir Aw Agam, district in eastern Nangarhar province, bordering Pakistan. She had lost her father and mother when she was just six in a bombing by the erstwhile Soviet fighter jets during the Afghan occupation.

She had migrated to Pakistan along with her brother and three sisters and grandmother. She married to Rehmat Gul, a baker near Peshawar in 1990. Now she has three daughters Rubina, Zahida and Aalia.

It is not only Gula, who is accused of holdingÂ fake Pakistani ID card, but the Afghan ambassador insists there are an estimated over 500,000 Afghan refugees to whom the National Database Regulatory Authority (Nadra) has issued Pakistani identity cards â€œas per its process of which the Ministry of Interior is very well awareâ€.