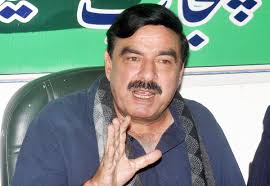 The arrests come hours before the partyâ€™s public meeting.

In a late night crackdown on Thursday, scores of Sheikh Rashidâ€™s AML workers, including his close relatives, were rounded up by police at Lal Havali.

Police crack down on AML leaders

Police raided the venue of the AML rally outside Lal Havali, the residence of Rashid and arrested several workers of his party. â€œSome 17 workers of Lal Havali, including my two nephews, have been arrested. Announcements are being made to vacate the venue by police. They want to seal Lal Havali,â€ Rashid told The Express Tribune by telephone on Thursday.

Rawalpindi police sealed all the roads and streets leading to Lal Haveli late Thursday night. Containers have been placed in front of Lal Haveli and roads leading to it. Moreover, access to narrow streets adjoining Lal Haveli has been restricted by placing barbed wires.

Further, authorities on Thursday suspended the Metro Bus Service in Islamabad and Rawalpindi â€œuntil further noticeâ€, following which entrance gates leading to all bus stops were locked for public.

However, Rashid vowed to continue with his announced rally, defying Section 144 imposed by the provincial government.

â€œIt is requested Imran Khan may be restrained from participating in the Jalsa, which is essentially an unlawful assembly in view of restrictions imposed under Section 144 CrPC,â€ the notification read.