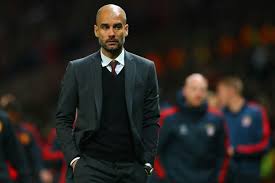 Manchester Cityâ€™s form under Pep Guardiola is beginning to show similarities to their final season under his predecessor Manuel Pellegrini, with a fast start followed by an autumn stumble.

Last season, City won their opening five matches under Pellegrini, then fell away so badly that they only just secured Englandâ€™s fourth and final Champions League qualification place.

Guardiola, whose team visit West Bromwich Albion in the Premier League on Saturday, would not be satisfied with a repeat performance. Yet having won his first 10 competitive games with the club, he has gone six without victory since.

It is the longest winless run of his managerial career, an unwanted record secured on Wednesday as his team were beaten 1-0 at Manchester United in the fourth round of the EFL Cup.

City have had some hard luck stories to tell during that run, as they should certainly have beaten Everton two weeks ago, missing two penalties in a 1-1 draw, and only took a point against Southampton last weekend despite controlling the second half.

It is also worth remembering that, for all their difficulties in recent weeks, City remain top of the Premier League and well placed to progress from the Champions League group stages.

Guardiola certainly did not field his strongest side at Old Trafford in midweek, making nine changes and fielding 19-year-olds Pablo Maffeo and Aleix Garcia in his starting line-up. Those changes were made in the knowledge that more significant tests lie in wait, with Barcelona in Manchester for a pivotal Champions League Group C game next Tuesday.

There will be serious reasons for concern, though, if Guardiolaâ€™s lengthening wait for a victory is not ended at The Hawthorns.

â€œWe have six games in a row without a win. I think we are going to win and we go in a good way.

â€œBarcelona is another game. We showed on Wednesday we can compete in tough games, very hard games, and I think we can go there (to West Brom) and we are going to win.â€

The manager received a piece of good news on Thursday, with captain Vincent Kompany able to train despite coming off at half-time against United on Wednesday, complaining of tiredness.

Kompany, who has suffered persistent injury problems over the last two years, was making his second start in four days at Old Trafford, and there were concerns that he may have broken down again.

Winger Kevin De Bruyne may also be fit to play some part after recovering from a calf problem.

Mourinho labels his Manchester life â€˜a disasterâ€™ ahead of derby

Saido Berahino remains out of the team, having not started a match since September 10, and has been placed on a fitness programme after manager Tony Pulis revealed the forward was eight pounds overweight.

In Berahinoâ€™s absence, Hal Robson-Kanu has established himself as the back-up to first-choice striker Salomon Rondon, playing 25 minutes at Anfield after midfielder James McClean â€” who is a doubt for this weekend â€” was forced off with a gashed leg.

Robson-Kanu, deployed as a winger last Saturday, is hopeful of more chances in a team he feels can improve on their current league position of 13th.

â€œWeâ€™ve got all the ingredients, itâ€™s just about applying ourselves game in, game out and picking up points,â€ said the 27-year-old Wales international, who scored a sensational goal for his country in their Euro 2016 quarter-final win over Belgium.

â€œWe probably felt we could have nicked a draw at Liverpool, but it wasnâ€™t meant to be. We move forward from that.â€