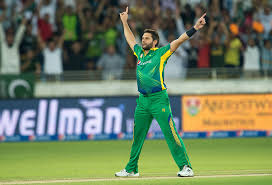 Former Pakistan T20I captain Shahid Afridi has been left out of Pakistan Cricket Boardâ€™s (PCB) central contract for the period starting from October 1 till June 30.

Afridi stepped down as T20I skipper on April 3, after leading the national side in Asia Cup and World T20 tournaments. He has not represented the Men in Green since then.

â€œI wish to inform my fans in Pakistan and all over the world that I am relinquishing the captaincy of the T20 Pakistani team of my own volition,â€ he previously said.

Similarly, off-spinner Saeed Ajmal has also been omitted by the board, hurting his chances of making a comeback in the national side.

Pace bowlers Wahab Riaz, Rahat Ali, and Mohammad Amir are in Category B.

And upcoming cricketers like opening batsmen Sami Aslam and Sharjeel Khan, and all-rounders Imad Wasim and Mohammad Nawaz have made it inÂ Category C.

However, opener Ahmed Shehzad and middle-order batsman Umar Akmal have been demoted to Category D.