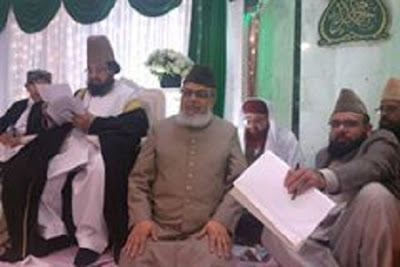 He has appeared at several Khatm events in the UK and the Netherlands and the record goes back a very long way indeed.

In a spot of Islamist bother, turning to a worthy like Shahid Raza Naeemi may seem eminently sensible. The head imam of the Islamic Centre of Leicester can provide credible cover, surely.

Here he is with the Queen and the former Archbishop of Canterbury, graciously received at Lambeth Palace in 2012 as an â€œinterfaith leaderâ€.

Here he is at an â€œinterfaith vigil in solidarity with the people of Iraqâ€ in 2014 with the current Archbishop of Canterbury.

Mr Naeemi is also the Interim Chair of the Mosques and Imams National Advisory Board (MINAB), which says â€œit aims to improve governance in mosques and the training of Imams in the UK through an agreed system of self-regulation amongst its membersâ€.

So no wonder the Muslim Council of Britain (MCB) appointed Mr Naeemi in April to its â€œindependent panelâ€ investigating MCB affiliate Aalami Majlise Tahaffuze Khatme Nubuwwat. It runs the Stockwell mosque where the BBC recently found â€œkill Ahmadisâ€ leaflets. The mosque had featured in similar news in 2011 as well. A man who mingles with royalty and Archbishops and leads MINAB â€“ perfect, especially when the MCB has its own troubling history with Ahmadis.

Moreover, the case is important. Khatm-e-Nubuwwat is the vicious Pakistani movement dedicated to inciting hatred against Ahmadi Muslims. It has an extensive, energetic, sinister and increasingly worrying UK network. Tanveer Ahmed, the man who murdered Glasgow shopkeeper and Ahmadi Muslim Asad Shah, is a big fan of Khatm.

The case is also difficult because Toaha Qureshi, the top man at the Stockwell Mosque and another worthy, has been digging ever deeper. He was furious about the BBC revelations. His response included further incitement â€“ he even claimed Ahmadis planted the leaflets in his mosque to make it look bad. Qureshi also complained to Ofcom about the BBC coverage. Earlier this month the Ofcom ruling squashed him (see from page 22).

So Mr Naeemi has quite a job on his hands.

Ah, but whatâ€™s this then? Why, itâ€™s Mr Naeemi attending a Khatm-e-Nubuwwat rally in Walthamstow just three weeks ago.

On Mr Naeemiâ€™s right in the photograph is prominent Walthamstow imam Abdul Qadir Jilani, a key leader of the Khatm movement in the UK. Just a few weeks ago the Evening Standard reported that it had found leaflets inciting religious murder in Mr Jilaniâ€™s mosque. Mr Jilani is also an open supporter of Mumtaz Qadri, the religious fanatic who murdered Pakistani politician Salman Taseer in 2011 for the â€œcrimeâ€ of standing up for that countryâ€™s persecuted minorities.

On Mr Naeemiâ€™s left in the photo is Abdul Aziz Chishti, another notable in the UK Khatm-e-Nubuwwat scene. He runs the Jamia Islamia Ghousia mosque in Luton. It has hosted several Khatm rallies in recent years â€“ it is a key centre for the movement. It is especially fond of off-the-hatred-charts Pakistani preacher Hanif Qureshi, who inspired Mumtaz Qadri to murder Salman Taseer.

Fine company indeed for an â€œindependentâ€ investigator of Khatm incitement.

Nor was Mr Naeemiâ€™s appearance at the Walthamstow Khatm rally some kind of regrettable error. No, itâ€™s far worse: he is part of the mission.

He has appeared at several Khatm events in the UK and the Netherlands and the record goes back a very long way indeed. All the way to 1999 in the case of a meeting where he reportedly said this, using the derogatory â€œQadiyaniâ€ term for Ahmadis:

But you must remember that having any sort of ties with them (Ahmadis) is far worse than being addicted to drugs and alcoholâ€¦ I am humbly requesting you, do not meet them or your faith would suffer from an incurable cancerâ€¦ Leave this place with the promise that not only will you sever all ties with the â€˜qadianis,â€™ but also with anyone who sympathizes with them.â€

The Walthamstow rally this month was just another milestone along his sacred way, not a deviation.

In fact, Mr Naeemiâ€™s mosque supports death for apostates, provided the majestic structures of an Islamic state are in place and the procedural niceties are observed, such as giving the apostate a brief chance to repent. This answer to an â€œask a scholarâ€ query appears on the mosqueâ€™s website:

All the schools of thought agree that a personâ€™s apostasy must be proven by the testimony of two male witnesses. Furthermore, all agree that the apostateâ€™s punishment is death.

The Hanafis state that he will first be offered a re-invitation to Islam. If he has left Islam because of doubt then the Imam will try to remove his objections and queries. He will be imprisoned for three days, to give him time to reconsider his decision. Imam Shafi adds that it is forbidden to kill the apostate before this period of three days. During this time, he will given food and drink regularly; this will come from his own money. If he does not have enough money then the food will be paid for by the Bayt al-Mal (Islamic central fund). He is not punished or tortured during this three-day period.

If the apostate still refuses to revert, then he is killed.

I love the bit about caring if the apostate has no money for food. Mind your death cult manners!

The mosque offers more wisdom in a presentation simply titled â€œPunishment in Islamâ€ and apparently attributed to Naeemi. Once again, apostates must die.

Mr Naeemi has even shared these views with a local newspaper in 2010:

Is is true that under Sharia law, a man who converts from Islam to Christianity must receive the death sentence after which his wife and children become the possessions of his family? â€œFirst of all, Iâ€™d like to say that Muslims are not seeking the introduction of all the aspects of the Sharia law, particularly the criminal law aspects, in the UK. This is not a Muslim country and weâ€™re not seeking to change or convert this country into one. â€œHowever, Sharia law says that if a Muslim changes their religion it is treason and the punishment for treason is death.â€

The MCB appointing Mr Naeemi to its Khatm panel is something like a notoriously corrupt party appointing a corrupt man to investigate a party outfit that has been exposed. It amounts to political fraud.

The organisation has been in the Whitehall cold since 2009. It is to be hoped that the Naeemi escapade will help to keep it there, where it belongs.