Perspective: Will Pakistan be able to #SaveNabeel? | Maria Kari 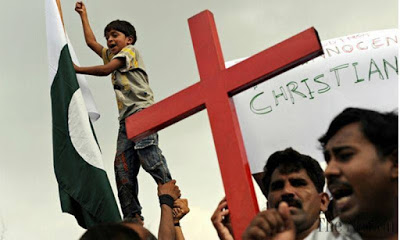 Perspective: Will Pakistan be able to #SaveNabeel? | Maria Kari

Like many other blasphemy cases, which originate because someone wanted to settle an old score against the accused, Nabeelâ€™s case is heartbreakingly frustrating.

In September, Nabeel Masih, a sixteen-year-old Christian boy was charged under Pakistanâ€™s notorious blasphemy laws. His crime was â€˜likingâ€™ a post that allegedly â€˜defamed and disrespectedâ€™ the Kaaba.

Over a month later the police have yet to submit an initial investigation report to the courts. This means Nabeel is currently languishing in jail. His family has been forced into hiding and, fearing for their safety, many of his Christian neighbours have fled the area.

Fair trials are uncommon in blasphemy law cases. Should Nabeel have a proper and fair day in court heâ€™d likely be found not guilty for two reasons.

First, there is evidence suggesting it was not Nabeel but a friend on his phone whoâ€™d hit â€˜likeâ€™ on the post in question. Second, Nabeel is illiterate. To be sentenced to life in prison or death row for â€˜likingâ€™ something you could not properly comprehend (i.e. read) would be a disproportionately abhorrent sentence that would draw global ire.

Like many other blasphemy cases, which originate because someone wanted to settle an old score against the accused, Nabeelâ€™s case is heartbreakingly frustrating.

According to the advocacy group British Pakistani Christian Association (BPCA), the teenager isnâ€™t even big on his faith. Wilson Chowdhry, chairman of the BPCA, describes Nabeel as â€˜nominally Christianâ€™ and as someone who doesnâ€™t go to church. Chowdhry is adamant that Nabeel did not set out to cause harm. He didnâ€™t know, until after his arrest, that the Facebook post could be offensive to someone.

Yet, despite Nabeelâ€™s repeated assertions of innocence, and the hard work of those bravely representing him, not enough of the country knows nor cares.

A brief history of Pakistani media

The main reason behind the national apathy and lack of information in blasphemy cases is because very few are willing to risk their livelihood to tell the story of the Nabeel Masihâ€™s, Asia Bibiâ€™s, Rimsha Masihâ€™s, and Imran Masihâ€™s of Pakistan.

Most of Pakistanâ€™s population of 194 million is likely to turn to Urdu-language media, which tends to be more conservative with a rigid, hardliner Islamist viewpoint that appeases its like-minded viewer-and-readership.

Itâ€™s the mighty reign of Urdu media that is the biggest obstacle in generating public support for the wrongfully accused in blasphemy law cases.

In an era of rapid and constant information sharing, media has proven to be the most effective agent of change. From the Arab Spring to #BlackLivesMatter, the power of conventional and social media is the match that ignites. The ability to disseminate far and wide stories of the downtrodden and dispirited amongst us is what gives the media a historically unprecedented power that is crucial in times when public sentiment can sway political decision-making.

And, because the media decides what the masses are told, this, in turn, determines the strength of the relationship between institutions of justice and the publicâ€™s perception of them.

The first television broadcast to take place in Pakistan was in Lahore in November, 1963. Up until the 80s the government held exclusive control over all broadcasts. Then, in 1980, private channels began to emerge. Today (with the exception of the Federally Administered Tribal Areas (FATA) where independent radios still need government permission to operate) media broadcast in Pakistan is well past its days of infancy. The country has over a hundred private news channels. Its newspapers and magazines are published in 11 languages. And most print media is privately owned (even though the government still owns the major news agency: the Associated Press of Pakistan).

In just over 50 years Pakistani media considers itself relatively free. But despite a patina of media freedom, the full power of media has not been harnessed to alleviate the countryâ€™s top human rights abuse: the religious persecution of non-Muslim minorities.

Pick up an Urdu daily and compare it to its English counterpart. The divide in the coverage of regular sectarian violence and routine violation of minority rights is stark.

English media in Pakistan considers itself secular and caters to a very small subset of the population: a niche group consisting of the â€˜eliteâ€™ and the educated. And while English outlets, like the Tribune, routinely highlight the mistreatment of Pakistanâ€™s minority groups (from the Hazara Shiites, Ahmadiyyas,Hindus, to Christians, etc) these attempts are equivalent to shouting from the rooftops during a tornado.

No one hears you.
Unfortunately, we writers write knowing we are preaching to the choir. Our words, which we have chosen as our weapon to affect societal change, are being broadcasted and consumed by those who already believe in the things that shock, outrage and disappoint us.

The people who really need to hear us â€“ the shopkeeper with anti-Ahmadiyya stickers decorating his counters, the rural farmer and his wife who refuse to share cutlery used by their Christian neighbours â€“ are not part of our readership.

Back to the future

According to Chairman Chowdhry of the British Pakistani Christian Association, at this point it doesnâ€™t matter what Nabeel Masih did or didnâ€™t do. Like in all blasphemy cases, mob mentality has taken over.

â€œEvery extremist in and out of town will demand blood [and] the police will be caught in a terrible position even if they know a charge is false,â€ says Chowdhry.

It is cases like Nabeelâ€™s that live and die on the hill of media intervention. And it is cases like Nabeelâ€™s where the mediaâ€™s negligence in reporting (or failure to report) can have a devastating, if not, fatal impact. Just like we saw in the repeated wrongful convictions of Asia Bibi at every level of court: every time an accused is tried and convicted by public opinion â€“ without ever having stepped foot in a courtroom â€“ the country becomes a little weaker, its people become a little harder.

A story that is consistently repeated across all media outlets is a story whose importance will grow as the public comes to adopt belief in its importance; this how the media acquires its power and its wherewithal to dictate an â€˜agendaâ€™. This is how Donald Trump managed to secure the presidential nomination. And this is how the case of Nabeel Masih could finally start to matter to the misinformed masses who could then affect change.

Unfortunately, English mediaâ€™s on-going fight for justice for Nabeel Masih is not going to be enough.

Targeting the already informed and negligible-sized population cannot alone bestow status, authority and legitimise the significance of Nabeel Masih enough to require public notice. Instead of appealing to supporters living in the comfort of ivory towers, the onus is on Urdu-speaking, mainstream media to accept its responsibility as the powerful vessel that it is and turn to the streets to generate support for Nabeel Masih.

It is the people of the slums, villages, and farming fields â€“ who repeatedly fail to peacefully coexist with their non-Muslim neighbours â€“ that can save Nabeel Masihâ€™s life.

It is these people we media-walas (media-persons) need to find and bring to the light.

be able to, Maria Kari, Perspective, SaveNabeel?, Will Pakistan