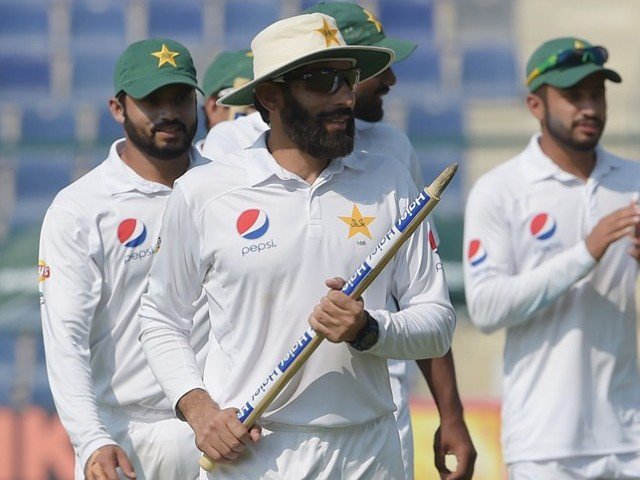 Skipper Misbahul Haq showed disappointment over the downfall of once-mighty West Indies after Pakistan achieved a series-clinching win in the second Test in Abu Dhabi on Tuesday.

Pakistan thumped West Indies by 133 runs on the fifth and final day to take an unassailable 2-0 lead in the three-match series.

The defeat is West Indiesâ€™ 19th in their last 29 Tests since November 2013, having won only four and drawn the remaining six.

It is in total contrast to the West Indies team of the 1980s, when under Clive Lloydâ€™s captaincy they were an indomitable force at international level, going undefeated in 27 Tests from January 1982 to December 1984.

â€œThatâ€™s bit disappointing and if you see their strength in international cricket they were always a force but now they are having a downfall,â€ said Misbah after Pakistanâ€™s victory in Abu Dhabi.

â€œThey are a young side with some players performing well in bits and pieces at the moment. They will become a good side, but at the moment they are lacking experience.

â€œEveryone wants to see a strong West Indies side like we had in the past. Right now itâ€™s really a big disappointing factor for all of their fans.â€

West Indies now face the prospect of a whitewash in the Tests, with the third and final match starting in Sharjah from Sunday.

They were also routed 3-0 in both the T20I and ODI series which were played before the Tests.

Misbah, who equalled the legendary Imran Khanâ€™s record of most Tests as captain with 48, is understandably happy with his own teamâ€™s progress.

â€œItâ€™s a matter of happiness to equal Imranâ€™s record but I think I am more happy because we won the match,â€ said Misbah, who now has 23 wins to Imranâ€™s 14.

However, he agreed the Sheikh Zayed Stadium pitch was unresponsive to bowlers.

â€œIt was a tough pitch to get bastmen out but at the end it is satisfactory,â€ he said. â€œI think wins help in the development of the team and its rise in the rankings.â€

Pakistan are now number two in the Test rankings behind India, while West Indies are eighth, ahead only of Bangladesh and Zimbabwe.

Jason Holder has now faced eight defeats in 11 Tests as captain but he feels there are signs of improvement.

â€œIt is a young and inexperienced squad so it will take time to get the results we have been looking for. We have been in the position of inconsistency for the last number of years so I donâ€™t feel any pressure,â€ said Holder, who was appointed captain last year.

â€œI am here to do a job and I am trying to do as best as possible.

â€œItâ€™s almost a decade since we have been struggling. We are in a situation where we are trying to get things right.

â€œIt will take some time for these boys to get nourished and developed and we have to give them that opportunity to do so.

â€œIf you have watched our cricket for the last couple of months then we have shown signs of improvement.â€

West Indies lost the first Test by 56 runs in Dubai, but still fought hard in both the matches, batting for 109 and 108 overs respectively in the fourth innings of the two Tests.