Thousands put through their PACES 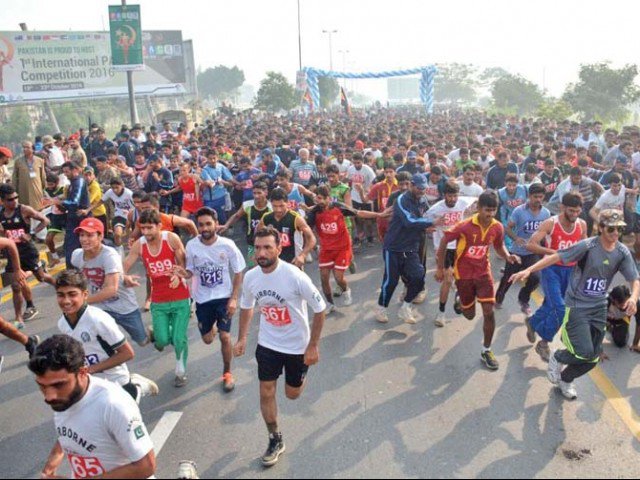 Thousands put through their PACES

Thousands of enthusiasts, belonging to all gender and age groups, participated in two separate â€˜mini marathonsâ€™ of 3.2km and 2km apiece as the First International PACES Competition concluded yesterday.

The 3.2km race was run by over 3,000 people, beginning from Lahoreâ€™s Askari 10 and finishing at the Ayub Stadium in Cantt.

The length of the race meant it was primarily filled with young or middle-aged runners, with some taking the race quite seriously.

â€œMarathon is always a fun race and I wanted to enjoy it to the fullest,â€ said a man dressed in premium running gear.

Others were even more impressive, with one athlete running barefoot. â€œI feel easier this way,â€ he said.

The 2km race featured as many as 1,200 women and children, who ran all the way from the Lahore Garrison Golf and Country Club to the Ayub Stadium. The youngest runner, eight-year-old Toheed, took inspiration from Aesop. â€œI am a tortoise running amongst the hares,â€ he said. â€œSlow and steady wins the race.â€

Those taking part in the races were not the only ones who showed up though, with many coming to egg on the participants â€” cheering from the sidelines or offering water to them.