Pakistan: Where executed blasphemy killer are revered as a saints | Naila Inayat 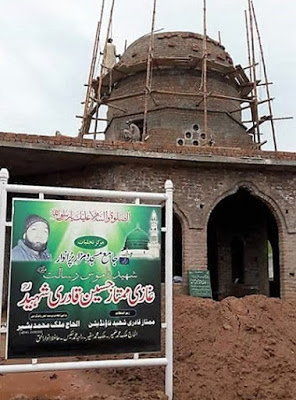 Pakistan: Where executed blasphemy killer are revered as a saints | Naila Inayat

“At the annual urs, you can see big cars, politicians, labourers, women with children or even the poorest come to pay their respect to Ilm-ud-Din. No one has achieved such respect in the history of Pakistan. Even Mumtaz Qadri was trying to imitate Din when he murdered Salman Taseer.”

Lahore: The mausoleum of a Lahore teenager who murdered a local publisher over blasphemy and the recusal of judge Iqbal Hamid-ur-Rehman from hearing the final appeal of Asia Bibi in the Supreme Court exposed the faultlines of faith in Pakistan.

A Christian and mother of five, Bibi has been facing death sentence since 2010 for allegedly insulting
the Prophet. It all began in September 1929, in pre-Partition Lahore, when an illiterate 19-year-old Muslim boy Ilm-ud-din stabbed a Hindu publisher Mahashe Rajpal for publishing a book Rangeela Rasul, which he felt hurt the religious sentiments of Muslims.

The case was the first-ever blasphemy-related incident in the subcontinent. Dinâ€™s defence lawyer was Muhammad Ali Jinnah. Ilm-ud-din was hanged in Mianwali Jail in October 1929. Today in Lahoreâ€™s Miani Sahib graveyard, Ilm-ud-din has a mausoleum. He is revered as a â€˜Ghaziâ€™ and a â€˜Shaheedâ€™. His urs is held annually on October 30 and thousands of devotees come to pay their respects to a man they consider the greatest â€˜Lover of the Prophetâ€™. While putting his body in the grave, the national poet of Pakistan, Allama Iqbal, who authored the poem, Saare Jahan Se Achha Hindustan Hamara, said emotionally, â€œThis uneducated young man has surpassed us, the educated ones.â€

â€œNot many people have the guts to do what Ilm-ud- Din did for all of us. At such a young age to have that kind of strong faith and do a selfless deed, I would say indeed he was the chosen one,â€ says 24-year-old Shahab Rehman while placing flowers on the tomb of Ilm-ud-din, the first Pakistani to be hanged for blasphemy in the subcontinent.

â€œPeople in Pakistan believe that the biggest thing Quaid-e-Azam did was to make Pakistan, I disagree, fighting this young boyâ€™s case was his greatest contribution,â€ he says.
Bustling with activity, the well-decorated tomb is visited not only by devout Muslims but also by people seeking help and guidance on real life issues. â€œI started coming to Pir Sahibâ€™s (Ilm-ud-Din) shrine 15 years ago when my husband was diagnosed with tuberculosis,â€ says 47-year-old Nadia Parveen. Parveenâ€™s husband is now buried in the same graveyard.

Says 21-year-old Nazia Mohammad, â€œI donâ€™t know about his (Ilm-ud-Din) historical relevance but I know he was a great saint. After I got married the doctors told me that I will not be able to bear children. After I started praying at the mausoleum I had my first child, and that too, a boy.â€
Mohammad Hussain, a helper at the tomb, says: â€œAt the annual urs, you can see big cars, politicians, labourers, women with children or even the poorest come to pay their respect to Ilm-ud-Din. No one has achieved such respect in the history of Pakistan. Even Mumtaz Qadri was trying to imitate Din when he murdered Salman Taseer (former Punjab governor).â€

The Khyber Pakhtunkhwa government led by Imran Khanâ€™s Pakistan Tehrik-e-Insaf has now included a compulsory chapter on â€˜Ghazi Ilm-ud-Dinâ€™ in its curriculum which celebrates a murderer who killed a Hindu blasphemer. Judge Iqbal Hamid-ur-Rehman recused himself since he presided over the trial of Qadri, who shot Taseer for supporting Bibi. Qadriâ€™s funeral was attended by 1,00,000 people in Islamabad, while in 1929 around 6,00,000 had gathered to pay tributes to Ilm-ud-Din.

Read original post here:Â Where executed blasphemy killer is revered as a saint