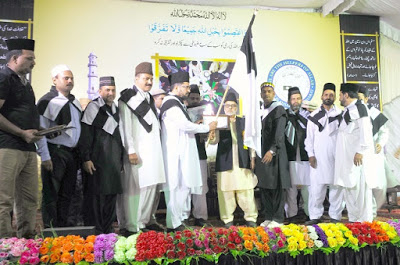 Maulana Mohammad Inam Ghori awarded Ialm-e Ina’ami to Majlis Ansarullah Qadian which stood first among Indian chapters for their excellent work for their organization and membership.

The concluding session, presided over by Chief Secretary of the Ahmadiyya Muslim Jama’at Bharat, Maulana Mohammad Inam Ghori, was held at the T.I. Senior Secondary School Grounds near Sarae Tahir.

After the Recitation of the Holy Quran, and pledge for Loyalty with Islam-Ahmadiyyat and Caliphate, Zainuddin Hamid Â thanked the Ijtema participants and volunteers for making the Ijtema successful and appreciated the local administration for their co-operation.

Maulana Mohammad Inam Ghori addressed the Ijteman participants also, advising the member to always follow the directives of the Khalifa of Islam.

Maulana Mohammad Inam Ghori awarded Ialm-e Ina’ami to Majlis Ansarullah Qadian which stood first among Indian chapters for their excellent work for their organization and membership.

Prizes were distributed also to the players and other elders who took any of the topt three positions in the various competitions held by Majlis Ansarullah Bharat.

The session was concluded with silent prayers.