A class apart: All too easy as Pakistan cruise along 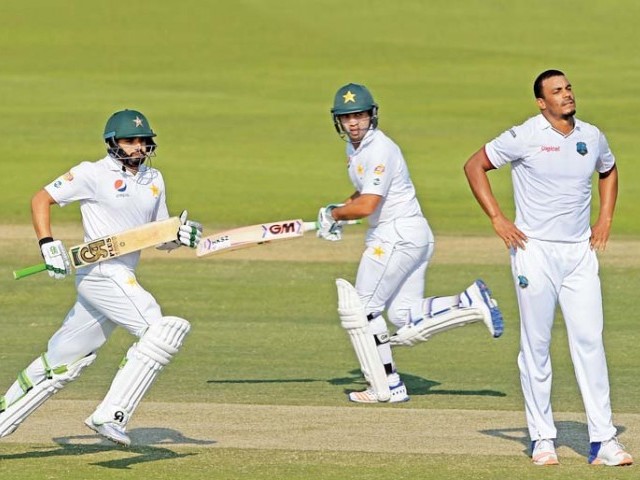 A class apart: All too easy as Pakistan cruise along

Pakistan are eyeing another Test series win in the UAE as they bossed the third day of the second Test against the West Indies at Abu Dhabiâ€™s Zayed Stadium.

Their bowlers shared the wickets among themselves to dismiss the tourists for just 224 in the first innings, handing Pakistan a massive 228-run lead.

Misbahul Haq, however, opted against enforcing the follow-on â€” making it the fifth time he has turned down the option. There was to be no second innings collapse a la the first Test though, as openers Sami Aslam and Azhar Ali further hammered home Pakistanâ€™s ascendancy with a 93-run stand.

Aslam was dismissed after making 50 while Azhar was unbeaten on 52 at stumps, playing alongside Asad Shafiq, who was on five.

Leg-spinner Yasir Shah was the pick of the Pakistan bowlers with figures of 4-86 but he was well-supported by pacers Rahat Ali (3-25) and Sohail Khan (2-35).

Such was Pakistanâ€™s dominance that people are already looking towards the third Test. Former chief selector Haroon Rasheed feels the hosts are in full control and should ease to a win, adding that the present West Indian team doesnâ€™t have the required batting depth to counter Pakistanâ€™s attack in red-ball cricket.

â€œPakistan should be aiming for a clean sweep in the series,â€ he said. â€œThey were pushed all the way in Dubai during the day-night Test with the pink ball but they are now comfortable once again with the red ball. West Indies have no depth in their batting; instead they rely heavily on a couple of players, so Pakistan should win this game with ease.â€

Rasheed was full of praise for the bowling attack, saying that the pacers bowled their hearts out in the searing Abu Dhabi heat.

Pakistan all out for 452 against West Indies

â€œRahat bowled really well â€” we rested our two most prominent pacers, yet Rahat and Sohail both made their presence felt and made full use of the opportunity,â€ he said. â€œThe red ball also brought reverse swing into play in dry conditions and I am happy the two pacers took full advantage of that.â€

Rasheed also advised caution against the over-utilisation of Yasir, with important tours to New Zealand and Australia to come.

â€œI hope Yasir has been given adequate rest as his shoulder can start hurting with the number of overs he has been bowling,â€ said Rasheed. â€œYasir should be given shorter spells with both Nawaz and Zulfiqar bowling more overs.â€

A class apart, All too easy, as Pakistan, cruise