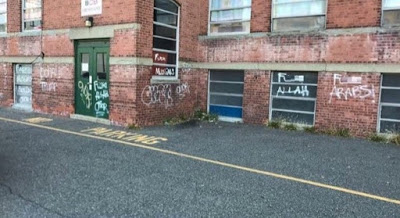 â€œThe people of this great city make up a great community, one of love and understanding. It is our position that the individual(s) who committed this atrocious and bigoted crime represent neither the people of Bayonne nor of this great nation.â€

Huffey, a Bayonne resident, is accused of spray-painting a slew of hateful messages â€• including â€œF*** Muslims,â€ â€œF*** ISIS,â€ â€œF*** Allahâ€ and â€œF*** Arabs,â€ as well as â€œDonald Trump,â€ the name of the Republican presidential nominee â€• on the exterior wall of the Muslim Community Miraj Center, located in the basement of a Catholic elementary school.

Donovan told The Huffington Post that police tracked Huffey down thanks to an eyewitness and surveillance footage from a nearby bank. Itâ€™s not clear whether Huffey has an attorney.

The Bayonne Department of Public Works arrived on the scene Friday to clean the graffiti, Donovan said.

â€œPersonally I really was saddened that somebody would do something so ignorant,â€ Waheed Akbar, an administrator and board member at the Muslim center, said Friday. â€œEspecially this being a Catholic school building. Thereâ€™s kids in this building. A day care center.â€

The group that operates the community center, Bayonne Muslims, said in a statement that the vandalism was a â€œcowardly and hateful act, but it is an isolated incident, particularly in our home town of Bayonne.â€

â€œThe people of this great city make up a great community, one of love and understanding,â€ the statement continued. â€œIt is our position that the individual(s) who committed this atrocious and bigoted crime represent neither the people of Bayonne nor of this great nation.â€

Bayonne Muslims, however, has clashed with some in the town over a proposal to build a new mosque. Critics claim the mosque would violate zoning ordinances and could cause traffic and parking problems.

But supporters say such complaints are simply a cover for anti-Muslim sentiment.

Earlier this year, Michael Alonso, a local Republican activist and vocal opponent of the proposed mosque, said in a statement that â€œin light of the Orlando terrorist attack recently committed in the name of Islam, a mosque in Bayonne would be unsafe and unwise.â€

BuzzFeed reported that some in Bayonne have placed â€œStop the Mosqueâ€ and â€œSave Bayonneâ€ signs in their windows.

â€œItâ€™s been a hot topic in the town,â€ Akbar told HuffPost of the proposed mosque. He said Fridayâ€™s vandalism may have stemmed from a â€œcombination of what weâ€™re hearing [about Muslims] from political candidates and us trying to build a center here.â€

A report earlier this year from the Council on American-Islamic Relations found 78 instances in 2015 where mosques were targeted for vandalism, arson and other types of destruction â€• a nearly 400 percent jump from 2014.

Similarly, a recent report from the Center for the Study of Hate and Extremism at California State University, San Bernardino, documented at least 260 hate crimes targeting Muslims in 2015 â€• a nearly 80 percent rise from 2014 and the greatest number of such crimes in any year since 2001.

In 2016, The Huffington Post has tracked nearly 290 acts of anti-Muslim violence, discrimination and political speech in the U.S.

Trump, whose name was spray-painted on the community center in Bayonne, has made a number of hostile and inaccurate comments about Islam and those who practice it â€• a group that includes more than 3 million Americans.

He proposed a ban on Muslims entering the U.S., falsely claimed to have seen New Jersey Muslims cheering after the Sept. 11 attacks, called for the creation of a national database of Muslims, said mosques should be surveilled, said Muslims should be profiled, told an apocryphal story about a U.S. general shooting Muslims with bullets dipped in pig blood, suggested that the Muslim mother of a fallen American soldier wasnâ€™t allowed to speak at the Democratic National Convention because of her faith, and once flat-out declared that â€œIslam hates us.â€

The Huffington Post is documenting the rising wave of anti-Muslim bigotry and violence in America. Take a stand against hate.

Editorâ€™s note: Donald Trump regularly incites political violence and is a serial liar, rampant xenophobe, racist, misogynist and birther who has repeatedly pledged to ban all Muslims â€” 1.6 billion members of an entire religion â€” from entering the U.S.