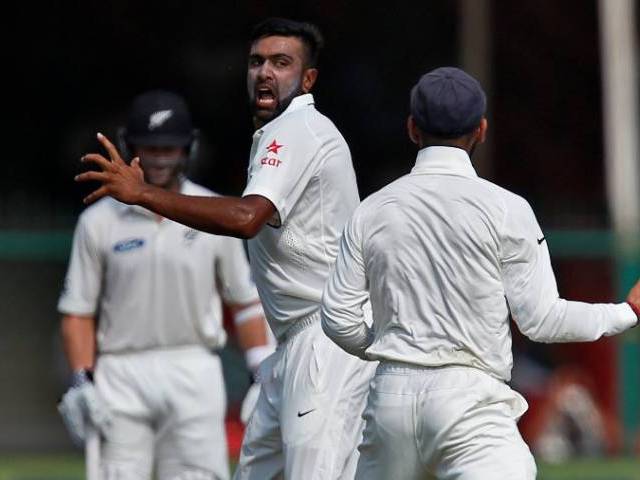 Resuming on 28 for no loss in reply to Indiaâ€™s huge total of 557 for five declared, New Zealand made a flying start with Martin Guptill (72) and Tom Latham (53) featuring in the first century opening stand of the series.

Ashwin triggered a spectacular batting collapse in the second session, however, and the touring side needed a defiant 71 from Jimmy Neesham to reach 299 all out.

India, who hold an unassailable 2-0 lead in the series, decided against enforcing the follow-on and were 18 for no loss â€“ an overall lead of 276 â€“ at the close in Indore.

The only setback for the hosts was opener Gautam Gambhir retiring hurt after injuring his shoulder while diving to complete a run.

Murali Vijay (11) and Cheteshwar Pujara (one) will return on Tuesday hoping to bat New Zealand out of the match.

Earlier, Guptill and Latham were positive in their mindset and decisive in their footwork against the Indian spinners as they added 118 for the opening wicket.

Guptill was under pressure after scores of 21, 0, 13 and 24 in the last two tests, but the experienced opener batted well for his 72, in which he struck two sixes and 10 fours.

Ashwin broke the partnership with a teasing off-break which Latham played across to spoon a leading edge back to the bowler.

Wickets tumbled after lunch with Kane Williamson (eight) pushing at an Ashwin delivery with an angled bat, only to drag the ball on to his stumps.

Ross Taylor did not trouble the scorers and was caught by Rahane at slip off Ashwin and the same combination sent back Luke Ronchi (0) and BJ Watling (23).

Ashwin had a hand in Guptillâ€™s unlucky dismissal too, the ball brushing his finger as he stooped to stop a Ronchi drive before it hit the stumps with the opener backing up too far at the non-strikerâ€™s end.

Neesham cobbled together fifty partnerships with Watling and Mitchell Santner (22) to push New Zealand towards 300.

Jadeja, who was fined half his match fees on Sunday for running down the pitch, claimed two wickets.