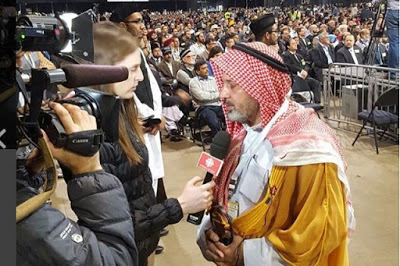 MISSISSAUGA, Ont. – Hundreds of refugees from Syria were able to experience religious freedom for the first time in years as they gathered at a conference of 25,000 Ahmadiyya Muslims in Mississauga, Ont., this weekend.

Wissam Alburaki, 41, brought his wife and three children to Canada as refugees last month, landing in Calgary by way of Kuwait and Dubai.

And while Calgary is where his family intends to stay, Alburaki was west of Toronto over the weekend, attending Canada’s Jalsa Salana â€” an annual meeting of the Ahmadiyya Muslim Jama’at.

He was one of hundreds of Syrian refugees attending the conference, according to Safwan Choudhry, a spokesperson for the Canadian chapter of the group.

Members of the Islamic sect are estimated to be in the tens of millions, Choudhry said.

And this year marks the 40th anniversary of the convention in Canada, which was attended by the community’s spiritual leader, Caliph Hazrat Mirza Masroor Ahmad, who is from Pakistan.

His family converted to the Ahmadiyya sect of Islam in the 1980s, he said. And since then, he’s listened to what the Caliph has to say.