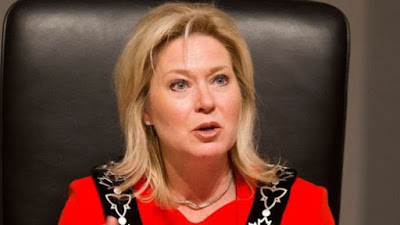 The article sent by Michaels alleges that Crombie was “purchased” by the owners of the Meadowvale Islamic Centre, that her husband is a convicted criminal and that the pair are planning on killing their son.

The mayor of Mississauga, Ont., says she is considering legal action after an independent news website published allegations against her, her family and the city’s Muslim community.

Mayor Bonnie Crombie says she has contacted police and is in talks with her lawyers after she says the Mississauga Gazette published an article under the headline “Bonnie’s Muslims Are Molesting Teenage Girls in Mississauga Highschools.”

The article could not be found on the Gazette’s website Sunday. A notice was posted saying members of the website’s staff had received death threats.

“I have taken this article down for now as I don’t want violence brought upon my team,” the notice said.

Acton Michaels, the website’s editor-in-chief, emailed The Canadian Press a link to a copy of the original piece, which has since been posted elsewhere online.

It was published under his name, but when asked by email if he wrote the article, Michaels did not reply.

The article sent by Michaels alleges that Crombie was “purchased” by the owners of the Meadowvale Islamic Centre, that her husband is a convicted criminal and that the pair are planning on killing their son.

It also alleges that a student at a local high school was sexually assaulted by Muslim boys.

Crombie says all of those allegations are false, and she’s asked the chief of Peel Regional Police, which is responsible for Mississauga, to determine whether the matter constitutes a hate crime.

Michaels said in an email that he would be meeting with his staff and didn’t want to make any public statements before then.