15 years on, the Afghan war still defies US timelines 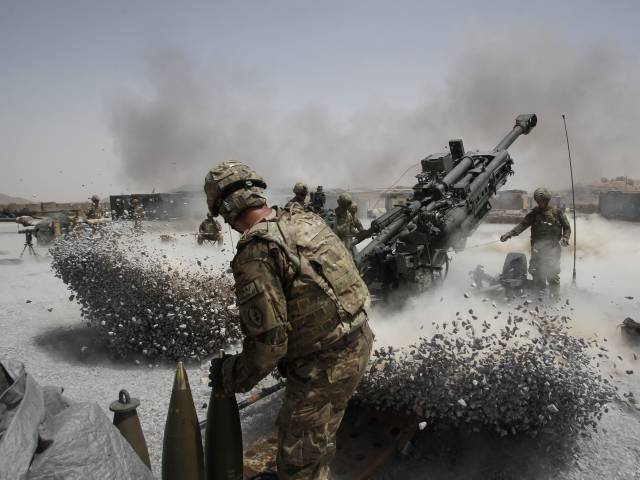 15 years on, the Afghan war still defies US timelines

Fifteen years after the US invasion of Afghanistan, President Barack Obama and the American military have dug in for a long campaign that defies rigid timelines and easy barometers of victory.

On October 7, 2001, in response to the 9/11 attacks, President George W. Bush launched Operation Enduring Freedom to dislodge the Taliban and capture or kill al Qaeda militants they were harboring. For much of the 15 years since, the US has groped for a strategy â€” flitting between trying to chase down jihadis, take accursed terrain, stand up a fragile government or beat back a dogged Taliban insurgency.

Obama came to office in 2009, promising a war-weary US electorate that he would bring the troops home. But, after a series of missed deadlines and some semantic gymnastics about the definition of combat, he finally abandoned his pledge during his last year in office. Insisting that he opposes â€œthe idea of endless war,â€ Obama has acknowledged his presidency will end before Americaâ€™s longest conflict does. Donald Trump or Hillary Clinton, who have barely discussed Afghanistan on the campaign trail, will inherit a much smaller war â€” with some 9,000 US troops on the ground â€” but one with no clear end in sight.

â€œRight now we donâ€™t have a time-bound commitment,â€ said a senior US administration official, who asked not to be named. â€œIt will be up to the next administration to determine how it wants to proceed.â€ That debate is likely to start with a fundamental question: Is a secure Afghanistan still a vital American strategic interest?

â€œYou could ask, now that al Qaeda has been decimated, do we still have a reason to be in this region? Itâ€™s a very legitimate question and certainly a question the next administration will ask very early on,â€ said the official. Afghan officials argue that the administration of Ashraf Ghani is trying hard to root out the corruption and bad governance that defined Hamid Karzaiâ€™s decade in power.

â€œIt would be an incredible mistake not to safeguard the progress that has been made,â€ a senior Afghan official told AFP. Afghan security forces still need training and US air power, the official said, as well as help in stopping Pakistan from harboring Taliban and Haqqani network leaders. Few US officials, either current and former, would disagree with that assessment. Many point to the experience of the 1990s as evidence for the need to stay. Back then Washington, having watched their mujahedeen allies oust the Soviets, began to disengage.

â€œIgnoring Afghanistan proved unwise,â€ a group of respected generals and ambassadors â€” including Ryan Crocker and David Petraeus â€” recently wrote in an open letter urging a sustained US commitment. â€œThe turmoil that ensued in Afghanistan after 1989 ultimately gave rise to the Taliban â€” and then to the sanctuary for al Qaeda that the Taliban provided Osama bin Laden.â€

Unlike Bush, Obama has been willing to bring the Taliban into the peace negotiations with Kabul, so long as they respect the rule of law and hard-won progress on things like womenâ€™s rights. But so far, neither the US killing of hardline Taliban leader Mullah Akhtar Mohammad Mansour nor Kabul brokering a peace deal with a notorious warlord has convinced militants to come to the negotiating table. Earlier this month Taliban insurgents launched an assault to retake Kunduz and so delegitimise the government, before being repelled. Washington is betting itâ€™s a matter of time before the Taliban, increasingly confined to rural areas and facing stiffer opposition from Afghan forces, change their calculus.

â€œThe Taliban, who are equally resilient Iâ€™ll grant you that, are learning that they are not able to gain their objectives,â€ the US official said. â€œThey have not be able to gain control and hold strategic terrain.â€ â€œSo the question is, how long will they persist in this strategy?â€ For much of Obamaâ€™s tenure, it was an open question how long the United States would wait to find out.

His declarations of timelines and determination to drawdown forces has been criticised for sending mixed signals about US commitment and thus encouraging the Taliban and elements in the Pakistani security services to wait Washington out. The administration argues they have offered a vital leverage.

â€œThe Afghan security forces, Iâ€™m positive of this, would not have developed in the manner they have developed â€” which in general has been very, very positive â€” had it not been for the requirement imposed upon them by the international community for them to become more self-reliant,â€ said the US official. But setting a hard timeline of ending the war in 2014 was â€œthe explicit announcement that the Taliban just capitalised on,â€ said Vanda Felbab-Brown of the Brookings Institution.

Obamaâ€™s departure is likely to make such timelines and troop numbers less of a political hot potato. That may be fitting in a war where victory is illusive and success or failure cannot be easily measured by the number of boots on the ground.

15 years on, defies, still, the Afghan, timelines, US