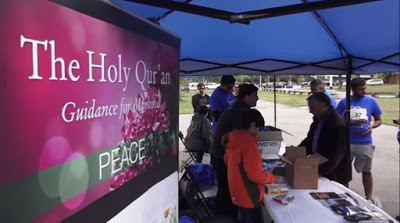 The Ahmadiyya Muslim Youth Association hosted a 5K run/walk to raise money for a local food bank and an international charity in Washington, D.C., Oct. 1, 2016.

NEW YORK â€” â€œThis is true brotherhood. This is true love for humanity,â€ Hanan Shahid said. He was referring to the unique position that some Ahmadi Muslims now find themselves in: Persecuted in countries like Pakistan for not being â€œtrueâ€ Muslims, members of the Ahmadiyya minority sect have long struggled for acceptance and the freedom to practice their version of Islam.

Here in America, where recent acts of violence and simmering Islamophobia have put many Muslims on edge, Ahmadi Muslim-Americans now find themselves representing and defending the very religion in which they themselves have not been fully accepted.

â€œItâ€™s almost ironic that weâ€™re fighting the battle for true Islam … [for] the Muslims that are out there that are denouncing us. … We are upholding the faith of Islam, which they believe in as well,â€ Shahid said.

The Ahmadiyya Muslim Youth Association hosted a 5K run/walk to raise money for a local food bank and an international charity in Washington, D.C., Oct. 1, 2016.

The Walk for Humanity, in the borough of Queens, was organized to raise money for hunger charities and was one of five simultaneous races run Oct. 1. The other races were held in Washington, D.C., Los Angeles, Houston, Texas, and Zion, Illinois. The outings were as much an opportunity to do good as they were to raise awareness for the Ahmadiyya community.

‘Helping mankind’ is their message

â€œWe believe that giving the right message of Islam is very important, and the right message of Islam is humanity and helping mankind,â€ said Zeshan Hamid, vice president of the Ahmadiyya Muslim Youth Association. â€œWe do get affected by the Islamophobia thatâ€™s going around,â€ he continued. â€œWe look to cure that by communicating with people.â€

Attiyah Malik attended with her husband and two children.

â€œPeace is a really big part of our culture, our faith and the way we live our lives,â€ she said As a child of Pakistani immigrants fleeing persecution, Malik appreciates the religious freedoms America afforded her and her family.

â€œThatâ€™s why so many people come here, because you can believe what you want, and as long as you’re peaceful, you have a home,â€ Malik said.

Recent bombings in New York and New Jersey upset her, she said, because they allegedly were staged by a U.S. citizen of Afghan descent.

â€œIâ€™m an American. I was born here. I was raised here … [and] someone attacked my country,â€ Malik said. â€œSo that hurts. And then someone used my religion, which for me is intrinsically personal.â€

Many of the Ahmadi Muslims gathered in Queens were quick to point out the motto of their community: â€œLove for all, hatred for none.â€

The Ahmadiyya sect was founded in 1889 by Mirza Ghulam Ahmad. His followers believe he was the second coming of the Messiah. This belief is a departure from that of mainstream Muslims, who consider Muhammad to be the last prophet of God.

‘Violence not the answer’

A mainstream Muslim himself, Imam Mustafa El-Amin of the Masjid Ibrahim (mosque) in Newark, New Jersey, said more violence is not the answer.

â€œWhen you see the long history of Shiites and Sunnis [the two largest denominations of Islam] and you see the violence, the killing, you see that controversy for hundreds of years,â€ the imam said. â€œ… Looking at that reality and [then] when I look at the Ahmadiyya community, as I look at the Jewish community, the Christian community, it really should be about all of us coexisting peacefully and in harmony, although we may have different views of religion and different views of the world.â€

â€œIn Islam, we are taught that only God can judge who is and isnâ€™t a Muslim,â€ added 30-year-old Salaam Bhatti, who won Saturdayâ€™s race in New York. â€œWeâ€™re supposed to just be competing against each other in good works, and let God decide at the end of the day.â€
Read original post here:Â USA: Muslim Sect Reviled Abroad Seeks Acceptance