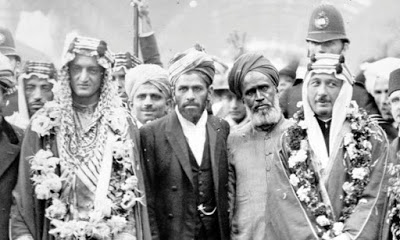 â€œI am absolutely in the dark as to the real cause, and so, I believe, is his Highness the Emir. It is said that the King has been given to understand that the mosque is not a Moslem mosque, which is a patent absurdity. I believe that he has been misinformed in some way.â€

4 October 1926: After the opening ceremony the Imam called the faithful to prayer from the minarets high over the roofs of suburbia

Fleet Street, Sunday
There was a strange meeting of East and West at Southfields this afternoon, when the first mosque to be built in London was opened. The mosque, a graceful little building with a dome in concrete, is placed close to the District railway and in the midst of suburban villas. After the ceremony the Imam called the faithful to prayer from the minarets high over the roofs of suburbia. It is built altogether with steel and concrete, and, unlike the Eastern mosques, it has windows, as a concession to our climate. The architect is Mr. J. H. Mawson, of Lancaster, who, with his father, the well-known town planner, was able to study the architecture of mosques during the reconstruction of Salonika. It is in its incongruous surroundings a thing of beauty.

A special interest was aroused in todayâ€™s ceremony owing to the uncertainty up to the last moment whether the Emir Feisul, the Viceroy of Mecca â€“ the second son of the King of the Hedjaz, now on a visit here, â€“ would perform the opening ceremony. It had been stated that this was one of the chief objects of the Emirâ€™s visit to England. A day or two ago the newspapers announced that Ibn Saud had telegraphed to his son forbidding him to fulfil the engagement, but this again was denied. The guests, on arriving to-day, found a notice displayed announcing that the Emir had been â€œprohibitedâ€ from opening the mosque, and that his place would be taken by Kahn Bahadur, the Sheik Abdul Qadir, a member of the Indian Delegation to the League of Nations. There was some excitement about this, and everyone was much disappointed not to see the handsome young prince.
The Emirâ€™s letter
Even after the explanation given to the company by the Imam of the mosque, the mystery of the Emir was not properly cleared up. He said that he had received a letter from the Foreign Secretary to the Sultan â€“ now in London with the Emir â€“ regretfully informing him that the Emir would not be able to attend the ceremony. The Secretary added, â€œThis is a matter which occasions his Highness very great regret, and both the Highness and myself wish all success to yourself and all prosperity and blessing to the Mosque.â€

The Imam explained that the King of the Hedjaz, in reply to the invitation that he should send a representative, informed him that his son would come to London for the purpose. When the Emir reached London the programme was settled with his officials, but when all the arrangements were complete he saw in the press to his great surprise that the Emir had been forbidden to attend. On Saturday morning the Foreign Minister came to the mosque and explained that owing to some misunderstanding the King had instructed Feisal not to come. The Emir himself, said the Imam, believed the Ahmadiyya community was doing good work.

â€œI am,â€ added the Imam, â€œabsolutely in the dark as to the real cause, and so, I believe, is his Highness the Emir. It is said that the King has been given to understand that the mosque is not a Moslem mosque, which is a patent absurdity. I believe that he has been misinformed in some way.â€

The view taken in conversation by people in touch with the affair was that Ibn Saud has changed his mind about allowing his son to appear, owing to newspaper accounts of the London Ahmadiyya community. This community, as is well known, is extremely tolerant in its outlook towards other religions, and the point which has caused alarm is probably the statement that Christians would be welcomed. The King of the Hedjaz is the leader of the Wahabi sect of Mohammedans, who are extremely strict in their beliefs and practice. This, of course, does not explain why the original permission was given, for it is inconceivable that Ibn Saud was not well aware of the tenets of the Ahmadiyyans.

The ceremony this afternoon, when the black doors of the mosque were opened with a silver key, began with a recitation from the Koran and the murmuring of prayer. East and West met in the assembly â€“ turbaned Orientals from all the sects of Mohammedanism, Indians of other religions, including the impressive Maharajah of Burdwan, members of foreign legations in London, and many prominent Englishmen who have had experience in the East. The Imam read a long message from Mirza Mahmud Ahmed Khalifatulmasih , the head of the community in the Punjab, who laid the foundation-stone of the mosque two years ago.

This content-post is archived for backup and to keep archived records of any news Islam Ahmadiyya. The views expressed by the author and source of this news archive do not necessarily reflect the views and policies of iRabwah. iRabwah is not an organ of the Ahmadiyya Muslim community, nor in any way associated with any of the community’s official websites.
archive, London's first mosque, The Guardian, UK